Taking Aim at the Elephant in the Room: Why Republicans Should be Nervous 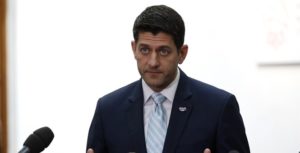 Last week, President Trump begrudgingly signed into law a $1.3 trillion omnibus spending bill that runs out in September.  The Republican-controlled Congress sent the president a bill that rightfully increases support for the U.S. military but doesn’t offset spending and, thus, increases our national debt by at least $1 trillion.

The American public has little appetite for hard decisions.  Even the Republican base refuses to have an honest conversation about the long-term sustainability of entitlement spending.  At some point, we will be forced to reconcile our list of wants with real needs, and that will be a necessary but painful process.

But it’s about to get painful for Republicans immediately.

Pro-life Americans elected Donald Trump as president, and he has not disappointed.  He has followed through on promises to appoint constitutionalist judges and used every legal tool of his Administration, from personnel to regulations, to side with life.

However, he cannot do it alone. Sure, the House of Representatives took up easy-to-pass bills like the Unborn Child Protection Act, which protects children beyond five months gestation. Public opinion is strongly in favor of these commonsense limits. The majority of the Senate agrees but could not reach the 60-vote threshold.

However, Congress cannot vote for spending bills paying for abortion and maintain their pro-life credentials.

Pro-life voters elected Republicans to protect life, and if they do not, what’s the point?  We have voted, rallied, phone banked, gone door to door, and given small contributions to assure that Republicans are elected.

So here’s the deal: Concerned Women for America Legislative Action Committee will score against any future spending bills that allow our tax dollars to fund big abortion. We will not support legislators who vote for these bills. Working quietly behind the scenes has failed.  At this point, it is better to be feared than loved.

We would rather find more pro-life Democrats like Dan Lipinski than continue to be patted on the head and ignored.  The gavel is in the hands of supposedly pro-life Republicans, and it is about to be wasted if they can’t make changes with it.

The omnibus spending bill was a complete backhand to the pro-life movement.  It did not include language for conscience protections for pro-life medical professionals, a repeal of D.C.’s assisted suicide law, a ban on fetal tissue research, or a ban on detainee abortions for DHS.

And Republicans again funded Planned Parenthood, the nation’s largest abortion provider, who is on track to receive about half-a-billion dollars per year.  How is this possible?  Planned Parenthood provides one in every three abortions performed in this nation, over 321,000 per year.  The American public overwhelming opposes the entanglement of their money with the taking of innocent human life.  Polls show that 60% of Americans oppose tax dollars funding abortion.

Planned Parenthood is currently under investigation by the FBI for the buying and selling of body parts of aborted babies, yet their friends in Congress are more willing to fight than pro-life members are willing to stand firm.

Our president clearly articulated to Congress that he will not sign another funding bill like the last, and we should believe him.  The President has called for an end to the filibuster.  That is a strong suggestion but even short of that idea Mitch McConnell should require Senators to literally hold the floor if they wish to stop legislation.  House Appropriator Robert Aderholt (R-Alabama) on Alabama radio has called the current system a “phony filibuster” and he is right. The pro-life community can no longer allow Republican lawmakers to get away with bowing to the big abortion lobby.

As the leader of the nation’s largest grassroots women’s organization, as a conservative, and as a defender of life, I am embarrassed by the omnibus spending bill.  Planned Parenthood supporters in the Senate need to have to explain why they are choosing funding abortion over funding Social Security in a shutdown.

This is about light and darkness — life and death.  We will stand with life.

Editor’s Note: A version of this article was published by Townhall. Click here to read it.