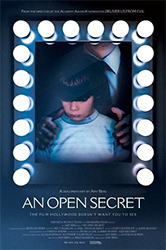 This month, Hollywood’s dirtiest secret may finally get the public exposure and national attention it warrants. As the documentary, An Open Secret, is set to debut, it is more than fitting to address the despicable exploitation of child stars that has gone on for years under the radar. The documentary is a compilation of personal stories of young rising stars, now adults, who were sexually abused by producers and directors in the industry.

Sadly, we often see it coming as soon as the child signs on to seemingly harmless networks like The Disney Channel. As much as we love to see talented children make it on the big screen, we are not surprised when the industry takes an otherwise healthy child and turns them into an unrecognizable wreck of an adult. What are the underlying causes of this drastically negative life change, and what can be done about it? There are three “roles” (pun intended) that need to be brought to the forefront of this discussion: the overwhelmingly unchecked role of pedophilia and sexual abuse in Hollywood, the role of stage parents, and finally, the role of the public.

The Casting … Playground?
In a study done by the Bureau of Justice, 58.7 percent of sexual offenders are acquaintances of the victims — as opposed to family members or strangers. In 67 percent of sexual assault cases that were reported, the victims were juveniles. Since that study in 2000, there have been at least 12 cases of industry related abuse reported in Hollywood alone — and that is simply the cases in which victims have testified. As time goes on, the list is getting more extensive as former child stars like Alison Arngrim and Mary McDonough come forward as victims of alleged sexual predators, men such as talent manager Martin Weiss and casting agent Jason James Murphy.

According to actor Corey Feldman, who spoke out on being sexually abused by multiple men in the industry, the number one problem and biggest secret in Hollywood is pedophilia. Statistics show that the average child molester will victimize between 50-100 children before being arrested. Feldman suggests that directors and producers sometimes give drugs to young actors and solicit sex from them. It’s hard to prosecute offenders, because it is basically the child’s word against the producer’s — not to mention the ability that these despicable men have to pay hush money. Singer R. Kelly allegedly had sex with dozens of underage girls. One girl filed a lawsuit about a sexual relationship that she said scarred her and other girls for life. It appears that R. Kelly was allowed to pay the women money to settle the lawsuits.

Furthermore, one of the other major secrets which the public rarely speaks out against is Hollywood’s despicable “casting couch.” The casting couch refers to the deplorable way in which producers and directors use their position and power to solicit sex from actors who are trying to “make it” in the industry. In an ABC News interview, Gwyneth Paltrow spoke out about how dangerous the acting industry can be — especially for newbies and wannabes just starting out. She mentions how directors will take advantage of their power and are keenly aware of the desperation of an aspiring actor.

Mommy Clueless
This brings up the next party involved: stage moms. It doesn’t help that some parents take on a “fame at-all-costs” mindset which trickles down to their kids, making young hopefuls willing to do whatever their bosses ask in order to land a role.

It is mind boggling that the parents of child stars like Corey Feldman would not press charges the minute they found out about the abuse. Actress Jada Pinkett Smith tells it straight:

“[m]ost of the time with child stars, the child has all the responsibilities and the mother and father don’t understand what’s actually happening to them, so the child can trust no one. … But with us the paradigm stays the same because the child can still be the child with an extraordinary gift.”

While money is not an issue for her two child stars, Smith acknowledges the pressure that a child can face when they are the major source of income for a family. Some stage parents are willing to basically prostitute their kids in order to make money. Their child may grow up to be a successful actor, but they often grow up to be an extremely unhealthy adult.

A Public Outraged
Finally, the last role is played by the public; in order to eradicate Hollywood corruption at its source, the public must hold both lawmakers and the industry accountable. California, specifically, has begun cracking down with stricter regulations on those in entertainment who work directly with minors. However, documentaries like An Open Secret are a reminder that officials are not doing enough.

It is the public’s duty to make sure that this vile exploitation is eliminated, beginning at the parent level. First, stage parents should never leave their child alone whether on or off the set. California law states that, while the child is working, parents are required to be within sight and sound of them. Lawmakers must hold the industry accountable to such laws and perform thorough background checks to ensure that the highest safety standards are being upheld. Moviegoers and music fans alike must hold lawmakers responsible for enforcing the legislation they’ve set forth. An injustice is an injustice, regardless of a perpetrator’s fame or status; hush money should never be deemed acceptable. It takes civic action on all fronts to expose and punish Hollywood’s criminals and, ultimately, eradicate this despicable corruption.