Sessions will fight for women 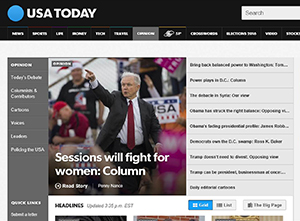 Did you catch Concerned Women for America’s (CWA) President & CEO Penny Nance’s dynamite op-ed in USA Today?  You don’t want to miss it!  Writing in support of Sen. Jeff Sessions’ nomination for U.S. Attorney General, and his vote on the Violence Against Women Act, Penny writes:

The point here is that it would still take a courageous senator to stand for what is right.  Truly standing on the side of women would require a senator to endure being painted by the malicious left as the total opposite.

It says a lot that Sessions did, in fact, stand for women, no matter the personal political cost he had to pay.

His nomination is great news for those of us who love justice and truth and who are tired of the political calculations that have plagued the DOJ under the Obama administration.

Sessions will be on the side of the people as the next attorney general. He will be for women, for children, for families — for all Americans. That is a welcomed and much-needed change at the DOJ.

The Senate should confirm him swiftly.

Click here to read the column as featured on USA Today.