Sen. Hirono Should Step Up for Justice 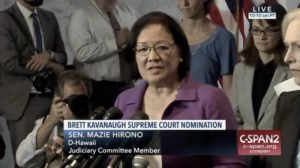 As a woman and as an American,  I’m dismayed by the message Sen. Mazie Hirono (D-Hawaii) delivered this week telling  “men of this country and the men in this committee” to “just shut up and step up” to the allegation of sexual assault from 36 years ago against Judge Brett Kavanaugh.  Let’s be clear, these allegations are just that — allegations. They are not facts backed up by evidence, and they are unsubstantiated by eyewitnesses.  Judge Kavanaugh, under oath, has categorically denied the claims. And yet, Sen. Hirono has served as judge and jury in condemning not only Judge Kavanaugh, but all men as complicit in the process.

Make no mistake, this is a form of sexism of an insidious nature.  In her rush to condemn, Sen. Hirono is exploiting the sexes, advocating a culture that favors, without questions, the accuser over the accused (even when wrongly accused). Her misguided view lacks any standard of justice.  She is making a mockery of the judicial system and the oath she took to uphold and defend the Constitution of the United States that expresslyprotects due process.

We should fear for our children — girls and boys — and the message this sends.  What exactly is the purpose of Sen. Hirono asking men to “shut up and step up”?  Truth?  Justice?  Hardly. Ironically, truth is exactly what the 11 Republican “old white men” on the Senate Judiciary Committee are trying to seek.  Since learning of these 11thhour allegations against Brett Kavanaugh, which Sen. Hirono’s own colleague, Sen. Dianne Feinstein (D-California), concealed for months, the Senate Judiciary Committee has set out to investigate these claims, as is their obligation under Senate rules.  Chairman Chuck Grassley has offered any way possible for this accuser, Dr. Christine Blasey Ford, to be interviewed and/or to testify in public or private.  This offer has so far gone unaccepted (but he continues graciously to maintain the offer open).

Senate Democrats are looking more and more complicit in colluding with her handlers to set the terms and conditions under which her testimony might be heard to further their ultimate objective of delaying the nomination until after the election and ultimately derailing it altogether.

Make no mistake, too many women have faced sexual assault without the confidence of due process to come forward. But Sen. Hirono’s rant, essentially condemning the male race as abusers first, disregards the very standards of justice that underpin civility and our freedom.   Yes, the #MeToo era has merit, but not at the expense and erosion of the foundations of our democracy.  Sen. Hirono should step up for justice, for women and for men, and perform her duty to uphold the Constitution that she swore under oath to defend.