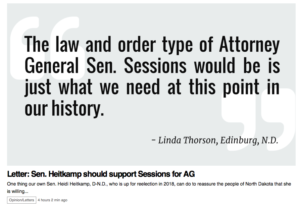 Concerned Women for America of North Dakota State Director Linda Thorson’s letter to the editor in support of Sen. Jeff Sessions’ nomination for U.S. Attorney General was published today in the state’s InForum newspaper.  Linda writes urging her Sen. Heidi Heitkamp (D) to look beyond partisan politics and support his nomination.  She wrote:

Sen. Heitkamp knows Sen. Sessions is an honorable man. She has co-sponsored legislation with him, like the Protecting Affordable Coverage for Employees Act, which was aimed at helping small businesses, and the Iran Nuclear Agreement Review Act of 2015, which was meant to hold the Executive Branch accountable on its infamous Iran deal negotiations.