SCOTUS Update: On the Ground in Iowa

This week, Concerned Women for America of Iowa were in Webster County and Fayette County to attend Sen. Grassley’s (R-Iowa) first town hall meetings since Justice Kennedy announced his resignation. As expected, this was a big issue at the meeting. Our National Field Director, Janae Stracke, and Field Coordinator, Amelia Koehn, who also happen to be from Iowa, were able to attend the meetings and speak on behalf of our thousands of members, some of whom were also at the meetings. 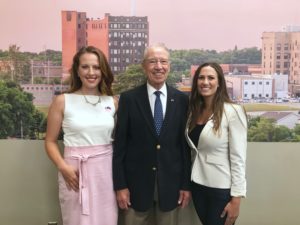 Both meetings were standing room only due to the large crowds of people. Janae shared that she must have chosen to sit right where the recruited planned parenthood supporters were sitting because they seemed to be all around her. Several of them stood to speak in support of abortion and expressed their fear of losing so-called “reproductive rights” in relation to the new supreme court vacancy.

However, when Janae stood and thanked Sen. Grassley for his fair and balanced work as the chairman of the Senate Judiciary Committee and encouraged him to see President Trump’s nominee through a fair and evenhanded process, the crowd’s agreement was obvious. They erupted in applause after Janae spoke, showing their support for CWA’s stance rather than the fear-tactics of Planned Parenthood. Janae’s comments set off a chain reaction and several other attendees then went on to speak in favor of Sen. Grassley seeing Trump’s upcoming nominee through a smooth and fair process.

At the meeting the next morning, both Janae and Amelia were able to speak in support of Sen. Grassley and after the meeting, a handful of other audience members approached them to thank her for speaking. Janae was also able to speak to Iowa Public Radio.

This is just the beginning! Throughout this confirmation process, Concerned Women for America will continue to encourage, equip, and mobilize people all across the country. We invite you to join us!