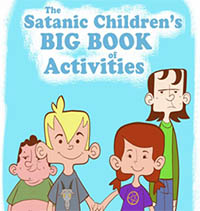 In Orange County, Florida, The Satanic Temple has released a statement that it will push to introduce Satanism into schools with reading materials such as The Satanic Children’s Big Book of Activities. Another informative material includes the title Jesus is dead. Under the guise of tolerance for others, the propagated resources promote satanic ideas where kids can complete “activities” like connect the “dots to learn how to draw an inverted pentagram.” According to news sources, The Satanic Temple doesn’t actually believe the devil is real but preaches religious tolerance — which doesn’t really make a whole lot of sense, but that is a whole other subject. Regarding religious tolerance, that’s all good and well, but there is one thing we must get correct. Make no mistake; the devil is real and roaming the earth looking for people to devour. While it’s wrong to assign to Satan power he doesn’t have, it’s also just as dangerous to let down our guard and believe the false claim that he doesn’t exist.

Religious liberty means freedom to practice whatever religion you choose. Unfortunately, that includes Satanism. While I plead with everything in me for people not to follow satanic teachings, I have no control over the beliefs of others. Religious liberty is a personal choice — as it should be. However, I want to discuss the serious implications that will result if we categorize satanic teachings as “harmless religious material.” I can’t dictate what others believe, but I can make certain that my children and I realize our position as believers when it comes to the lies of the enemy.

Fair warning, I’m leaving the political world for a bit on this blog and arguing straight from the Bible. This issue is deeper than politics and religious liberty; it deals with realms we should not treat lightly. On a personal level, I’ll (hopefully) be a mom someday. In the Bible, God says that “Satan is the father of all lies.” Do I really want my child to be educated with blatant falsehoods? It’s frustrating that parents work so hard to teach their children to be productive, loving, and healthy adults in all areas, only to have that hard work undermined by evil ideologies. Children who are engrained with lies grow up to be adults who see those same lies manifest themselves in forms of bondage: addictions, pride, selfishness, substance abuse, eating disorders, sexual sins — the list goes on.

On the flipside, I have personally witnessed adults who, once they understood the Truth, have been set free from their slavery to sin. Psychologists have found that healing from addictions and breaking life-altering bondage is only possible through a complete mind, body, and soul renewal by the God who created them.

God says that “the thief comes only to steal and kill and destroy. I have come that they may have life, and have it to the full” (John 10:10, NIV).  In this warning, God shows that Satan has one purpose — to promulgate death. Everything Satan does is meant to push humans toward destruction. On the other hand, the second part of the verse encourages us that He has done the exact opposite. Without an understanding of who God is and what He has done for us, we cannot experience true freedom. Satan knows that where the Spirit of the Lord is, there is freedom. He knows that when a person puts Truth into their mind, Satan has no power over them.  Quite frankly, that scares him.

I am so thankful for the religious liberty of atheists because, ironically, it’s that same freedom that allows me to practice my beliefs rooted in God’s Word. However, what is hard for me to reconcile in my mind is the fact that propagation of satanic materials poses such a major threat to our children’s minds and ultimately their lives. You can’t restrict Satanists from sharing their beliefs or atheist’s for a lack thereof; so, what can you do?

Here is my answer: make your minds, and those of your children, strong. Learn for yourself and then teach them to be sensitive to lies so that when a falsehood is spoken an immediate red flag goes up in their heads. Then give them specific Truths with which to replace the deceptive statements. Acknowledge Satan for what he is. Be alert and realize the seriousness of the matter, that he is doing everything he can to destroy you. Don’t be fooled; he is keenly aware that one of the best times to get a foothold in someone’s life is when a person is young and still developing their view of the world. Recognize that there is a real battle, but more importantly, remind yourself and your kids that Satan knows he has already lost. All of his actions are simply a grasp for anything he can bring with him on his path to ultimate destruction. Believers have been given the Holy Spirit to protect us when we are tempted to believe Satan’s lies and, therefore, have absolutely nothing to fear. Fill your mind with so much Truth that God’s voice is louder than any lie that comes your way. Read the verse below and believe it in the deepest core of who you are. You may still be tempted, but you will have the confidence of deliverance.

“The temptations in your life are no different from what others experience. And God is faithful. He will not allow temptation to be more than you can stand. When you are tempted, He will show you a way out so that you can stand up under it.” (1 Corinthians 10:13, NLT).