Pro-Life and Pro-Choice Demonstrators Meet outside the Supreme Court 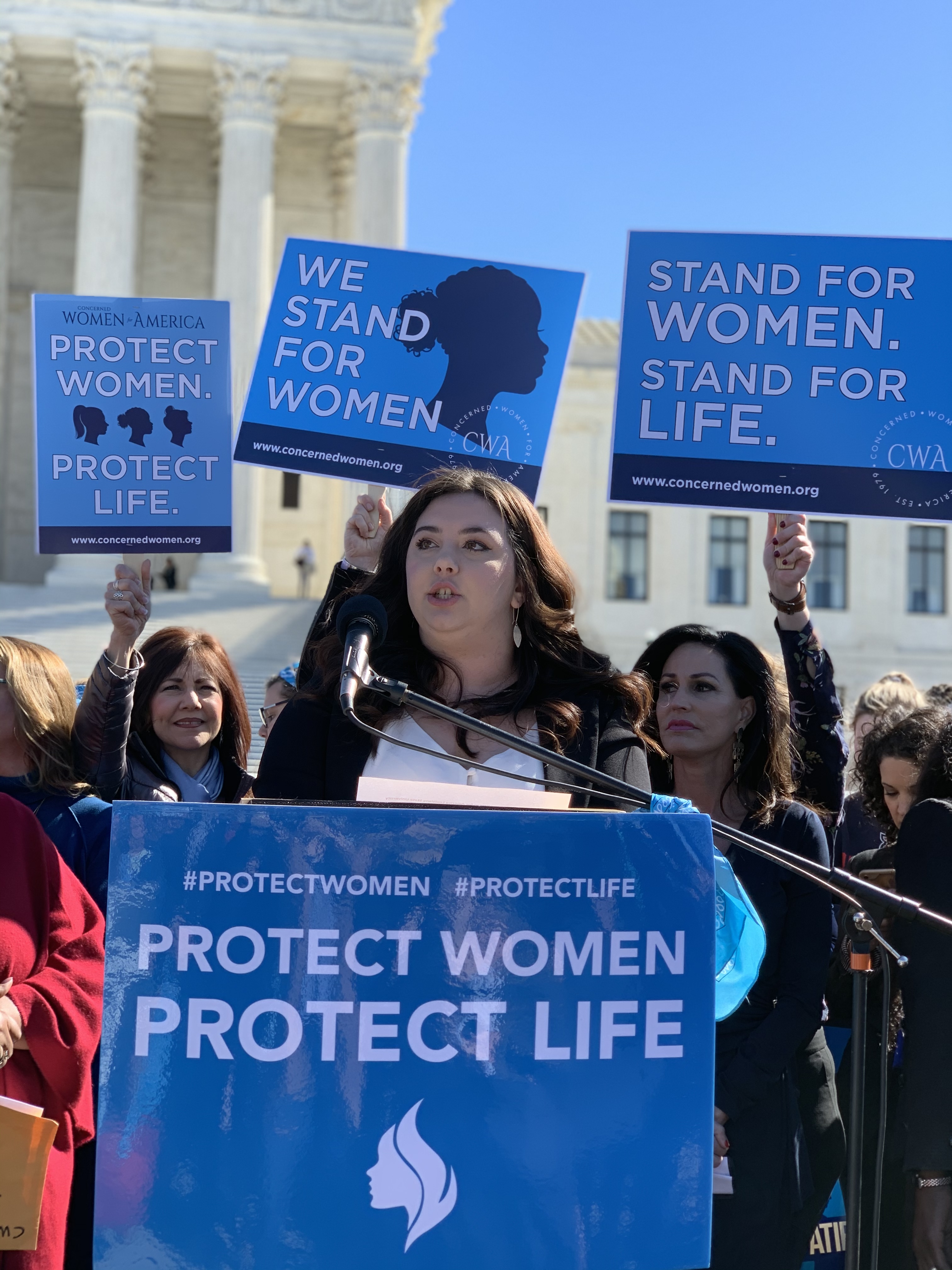 One of our amazing Young Women for America college chapter presidents, Lillian Knight, LSU, participated in the Protect Women, Protect Life rally on the steps of the Supreme Court fighting to uphold a Louisiana law requiring abortionists to have hospital admitting procedures. She is quoted in the article in National Review.

“On the steps of the Supreme Court on Wednesday morning, hundreds of demonstrators gathered as the justices heard oral arguments in June Medical Services v. Russo, the first abortion-related case on the docket since Justice Brett Kavanaugh joined the Court.

The case was brought by abortion providers against the state of Louisiana, challenging a law that requires them to maintain admitting privileges at a local hospital so women can get emergency care if necessary after a failed abortion procedure. Louisiana law currently requires the same of all other ambulatory surgical centers in the state; the Unsafe Abortion Protection Act aims to hold abortionists to the same standard.

Sources who attended oral arguments told National Review that seven of the nine justices asked questions. Justices Clarence Thomas and Neil Gorsuch were the two who did not.

Outside the Court, meanwhile, both the abortion-rights movement and pro-life advocates hosted rallies all morning, standing right beside each other underneath a perfectly blue and sunny sky, the abortion-rights crowd swathed in teal and the pro-lifers in a lighter shade of blue.

“My right, my decision,” read most of the signs on the pro-choice side. The signs were printed, and the rally coordinated, by the Center for Reproductive Rights, the abortion-advocacy group that argued against the Louisiana law this morning, representing June Medical Services and two unnamed abortionists.

One of the most prominent speakers for the abortion-rights rally was Senate minority leader Chuck Schumer (D., N.Y.), who directed part of his remarks at Justices Kavanaugh and Gorsuch. “They’re taking away fundamental rights,” he said. “I want to tell you Gorsuch, I want to tell you Kavanaugh, you have released the whirlwind, and you will pay the price. You won’t know what hit you if you go forward with these awful decisions.”

Representative Rashida Tlaib (D., Mich.) also addressed the pro-choice crowd, opening her remarks by suggesting that “they are obsessed with our bodies,” as well as that abortion is an issue of “economic justice” and “racial justice.”

“We have every frickin’ right to fight for our lives and our bodies,” Tlaib said. Most of the remarks from speakers at the pro-choice rally didn’t touch on the substance of the Louisiana law at all, or they falsely claimed that it was intended to restrict access to abortion. But in fact, in a decision upholding the statute last fall, the Fifth Circuit Court of Appeals ruled that “the only permissible finding, under this record, is that no clinics will likely be forced to close on account of the Act.”

Much of the abortion-rights rally centered around common slogans such as permitting or trusting women to control their own bodies.

A poster that one of the abortion-rights demonstrators held read, “Hey Kavanaugh, keep your religion out of my health care. And yea, we still believe Dr. Blasey Ford.” Another, much larger sign said, “Thank God for abortion.”

On the pro-life side of the divide, meanwhile, most signs read, “Protect women, protect life.” The remarks from the slate of speakers in defense of Louisiana’s law focused almost entirely on the law itself, as well as the goal of ensuring that women are able to get emergency care.

Katrina Jackson, the Louisiana Democrat who sponsored the Unsafe Abortion Protection Act, addressed the pro-life crowd after exiting the Court following the hearing. “For so long, this nation has put the abortion industry before the health and safety of the women,” she said.

“We will no longer be quiet, because we love the child, and we love the woman. And Louisiana is all about love, even when someone doesn’t agree with us,” Jackson added. “We seek to protect them in their decisions. We seek to hold others accountable, and especially when a billion-dollar industry makes money off of that woman’s decision, they should be held accountable just as other doctors who treat us for other things.”

One young woman from Louisiana, who serves as a campus leader for Concerned Women for America, spoke to the group close to the end of the rally. “Twenty-two years ago, my mom went to a Louisiana Planned Parenthood seeking to know what her options were because she was in a crisis pregnancy,” she said. “She had no support from anybody in my family or from my biological father. They told her that my life was not worth anything and that her only option was to abort me, that she would not be successful in life, that she could not get an education, and that I would essentially ruin her life. Twenty-two years later, I think she begs to differ.””