Press Release:  Education Department Throws the Civil Rights of Women Under the Bus 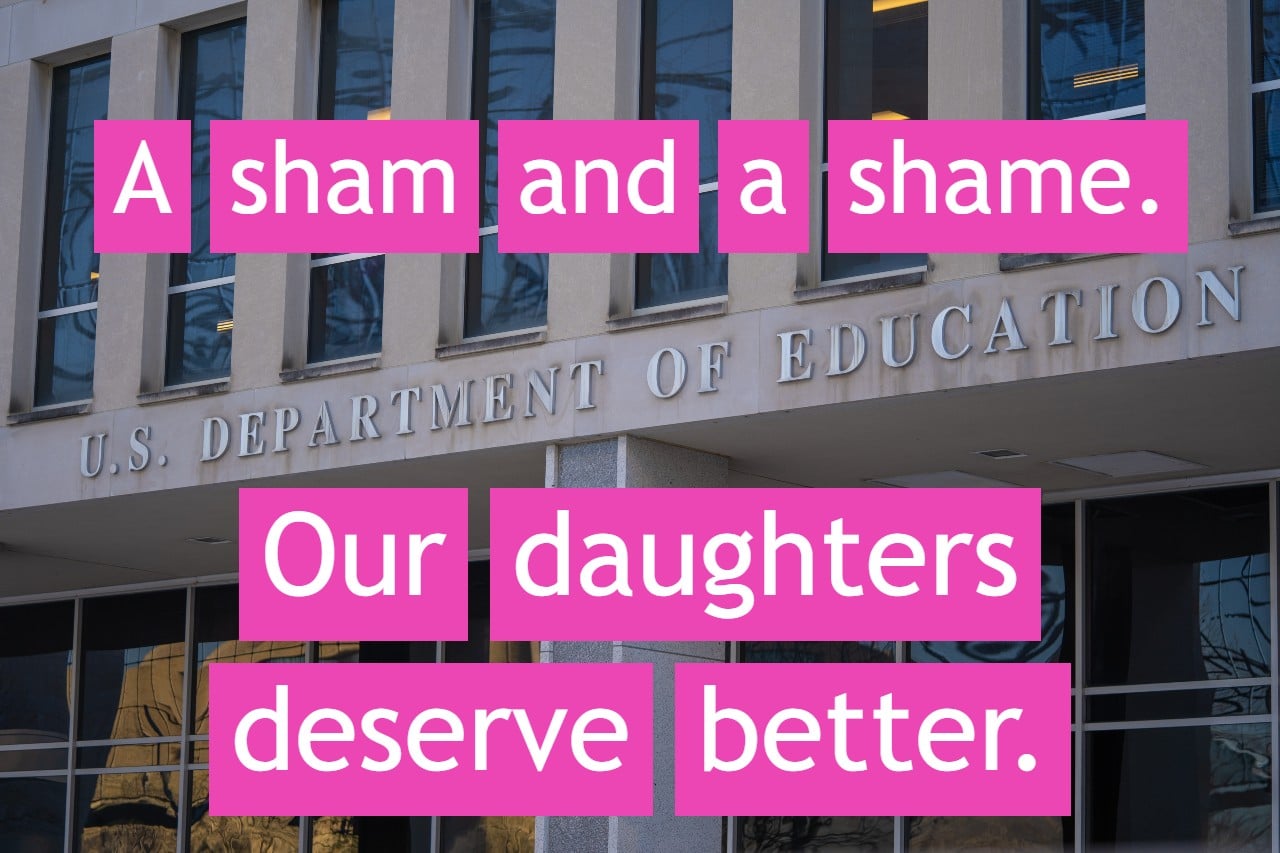 A sham and a shame. Our daughters deserve better.

Washington, D.C. – Just one week before the June 23 anniversary of Title IX, the Biden Administration has unconstitutionally reinterpreted the meaning of sex and effectively thrown the rights of women and girls under the bus. The landmark federal civil rights law enacted 49 years ago to prohibit sex-based discrimination and protect women has just been used to erase female status and turn Title IX on its head.

The U.S. Department of Education’s Office for Civil Rights issued a Notice of Interpretation explaining that “sex-based discrimination” includes gender identity and sexual orientation. The expansion of this definition means the government wants to force us to live under the fantasy that biology no longer matters and that the Biden Administration will no longer protect the equal rights of women and girls in education and athletics as intended.

From day one, the Biden Administration has been declaring war on what it means to be a woman. From replacing the word “mothers” with “birthing people” in its legislative proposals to leaving female athletes in a field of lost dreams, the Democrats have turned back the clock on decades of progress for women’s rights.

This decision is outrageous and insulting to every woman in America. It is detrimental to the safety, privacy, and opportunities of female students and athletes. Even Justice Ruth Bader Ginsburg, an icon of the feminist movement, understood that sex-based classifications could be permissible because certain “differences between men and women” are “enduring.” For years, we’ve watched young, courageous, female athletes work to excel in women’s sports and demonstrate a simple point: sex-separated sports are at the heart of fair competition because men have innate physiological advantages over women based on immutable biological differences.

Unfortunately, in this radical woke era that elevates self-declared identity over reality, women and girls have been sidelined by leftist ideologues who demand any man can claim female status and have full access to our sex-separated spaces and sports.

Concerned Women for America (CWA), the largest public policy organization for women in the nation, has been on the front lines of the battle to defend Title IX for female students and athletes. Last week, Doreen Denny, CWA’s Vice President of Government Affairs, provided live testimony for the U.S. Department of Education’s virtual public hearing.

With this radical reinterpretation of Title IX coming on the heels of a full week of testimony and thousands of public comments, the Department of Education’s decision was obviously made before the results were in. President Joe Biden and Secretary Miguel Cardona clearly don’t care about what the American people, including the majority of women, have to say or about safety and fairness for women and girls.

A sham and a shame. Our daughters deserve better.