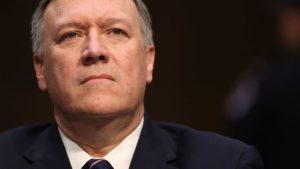 This week, newly appointed Secretary of State Mike Pompeo made international religious freedom “a front burner” issue for the U.S. Department of State, declaring it a “universal human right” for which the United States will fight around the world. These statements came in conjunction with the unveiling of the State Department’s 2017 International Religious Freedom Report which Pompeo deemed critical to the U.S. mission to defend religious liberty and “a testament to the United States’ historic role in preserving and advocating for religious freedom” across the globe. Furthermore, he underlined religious freedom as a fundamental right which the Founders recognized, saying:

Religious freedom is in the American blood stream. It’s what brought the pilgrims here from England. Our founders understood it as our first freedom, that is why they articulated it so clearly in the first amendment. As James Madison wrote years before he was President or Secretary of State, “Conscience is the most sacred of all property.”  Religious freedom was vital to America’s beginning; defending it is critical to our future. Religious freedom is not only ours, it is a right belonging to every individual on the globe. President Trump stands with those who yearn for religious liberty; our vice president stands with them, and so do I.

The 2017 report documents religious freedom abuses and violations committed by “governments, terrorist groups, and individuals” in 200 countries and territories. For example, the report calls out North Korea for denying rights to freedom of thought, conscience, and religion and estimates between 80,000 to 120,000 political prisoners in North Korea who are jailed “in remote areas” and under “horrific conditions,” some for religious reasons.

Additionally, Secretary Pompeo announced that the U.S. will host the first-ever ministerial to advance religious freedom at the U.S. Department of State July 25-26. The event will affirm a shared commitment of advancing religious freedom as a universal human right and will include ministers from collaborative governments around the world, as well as representatives from international organizations, religious communities, and civil society. However, Pompeo declared that the upcoming event will be held not only to discuss important issues, but will be about “action,” and the identification of clear and effective ways to ensure religious freedom is respected for all people.

“Religious Freedom is indeed a universal human right that I will fight for” Pompeo declared, “The United States will not stand by as spectators. We will get in the ring and stand in solidarity with every individual who seeks to enjoy their most fundamental of human rights.” Concerned Women for America stands with Secretary Pompeo in the fight against religious persecution and for the right to religious liberty that we believe “is not a gift from the government, but a sacred right from Almighty God.”  Please join with CWA in prayer and support as we monitor religious persecution around the world and advocate for liberty, the fundamental right of all people.