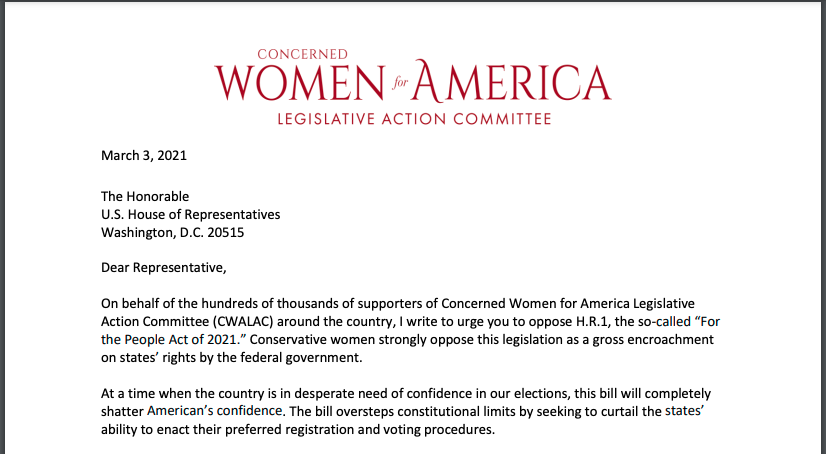 Concerned Women for America Legislative Action Committee sent a letter to the United States Congress asking them to oppose the dangerous H.R. 1 proposal. The letter enumerates some of the glaring problems with the proposal, saying:

At a time when the country is in desperate need of confidence in our elections, this bill will completely
shatter American’s confidence. The bill oversteps constitutional limits by seeking to curtail the states’
ability to enact their preferred registration and voting procedures.

Many Americans are deeply uncomfortable with the hasty, last-minute changes made in the last election
by non-legislative entities as a result of the COVID-19 pandemic. Many states are already undertaking
efforts to prevent such unconstitutional actions in the future. Yet this bill ignores the concerns of
millions of Americans and seeks to force states to conform to the Democrat’s preferred methodology in
clear violation of the federalism principles of our founding.

Millions are concerned with foreign interference in the election with online and other forms of
electronic voting mechanisms. Yet H.R. 1 forces states to implement online, automatic, and same-day
voter registration measures, no matter these concerns.

Further more, it highlights H.R. 1’s unconstitutional overreach, and ask members to, not only vote against the legislation, but to boldly speak of its many dangers in order to educate the public about the ongoing efforts of the left to fundamentally transform the country into a socialist nation. It concludes:

This bill will aggravate the deep divide on our country by changing the current bipartisan makeup of the
Federal Election Commission, weaponizing this important entity for political purposes. Not to mention
the blatant efforts to violate American’s First Amendment rights with vague standards on advocacy
efforts and even unconstitutional donor disclosure requirements for organizations like ours.

These are but a few of the concerns with this sinister legislation that will have an enormous impact on
the women I represent and their families. We, therefore, ask you to stand in strong opposition to this
attack on our liberties and respectfully ask you to speak out on behalf of the people it seeks to target.

Click here for our one-pager with more details on H.R.1.