Listen up! Your senator, Kay Hagan, is making her position on late-term abortion crystal clear. And you’re not going to like it.

The Senate has the opportunity to speak for those who can’t speak for themselves and protect the health of women when it comes to late-term abortion by passing S. 1670, the Pain-Capable Unborn Child Protection Act. Because these unborn children are capable of feeling pain after 20 weeks fetal age, this bill would regulate abortion, except in cases of rape, incest, or when the life of the mother is threatened.

Currently, the United States is one out of only seven countries that allow abortion past 20 weeks (that’s five months, the time when you’d normally be finding out whether you’re having a boy or a girl). Despite this, Sen. Hagan has refused to listen to the people of North Carolina.

The House already passed this legislation a year ago, but senators like Kay Hagan are stopping this bill from coming up for a vote in the Senate. We want to give YOU, CWA members, a chance to tell your senator that she needs to listen to the people of North Carolina and allow S.1670 to come up for a vote.

Concerned Women for America Legislative Action Committee (CWALAC), along with other like-minded groups (FRC Action, Susan B. Anthony List, Students for Life, and Americans United for Life) and other North Carolina pro-life leaders, will gather at Sen. Kay Hagan’s office in Charlotte to highlight her out-of-touch position on the Pain-Capable Unborn Child Protection Act, S. 1670.
Will you join us? 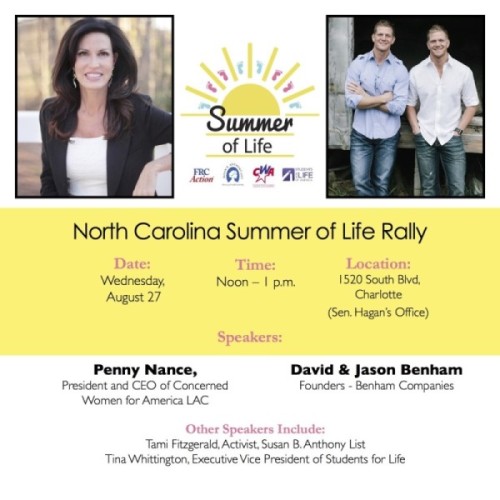 I’ll see you there!