March 6 Action Alert – The Faith of Our Founders 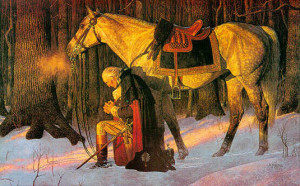 Recently, two symbols of our nation keep coming to mind: The picture of General George Washington holding the reins of his horse while kneeling in prayer in the snow and the patriotic stars-and-stripes lapel-pin cross of Christ that clearly connects our nation’s foundation to our heritage of Biblical faith and principles.

During the Revolutionary War, Abigail Adams wrote this to her husband, John Adams:

“The race is not to the swift, nor the battle to the strong; but the God of Israel is He that giveth strength and power unto His people. Trust in Him at all times, ye people, pour out your hearts before Him; God is a refuge for us…Almighty God, cover the heads of our countrymen, and be a shield to our dear friends…” June 18, 1775

As I prayed outside a Planned Parenthood clinic last week, my heart was broken for the mothers walking into the clinic with their small children in hand. I was also disturbed that I was standing alone as part of a peaceful prayer vigil in solidarity with the 40 Days for Life campaign. The apathy of God’s people in this nation is so discouraging! It is in direct contract to the two symbols and letter referred to above.

“Wake up, America!” is the battle cry the Body of Christ should be using, along with confession and repentance for our apathy, our disobedience, our fear, and our failure to obey God rather than man (Acts 5:29 ) and to occupy this land until our Lord’s return (Luke 19:13).

Where is His church? Where is the Body of Christ? Where are you?

Let’s not abandon our brethren around the world who are being martyred daily by God’s enemies. Those same enemies are within and just outside our compromised borders. Please pray, educate yourselves and take action with Concerned Women for America!

CWA CEO and President Penny Nance is standing with other women to counter the “war on women” rhetoric of our opponents by hosting a panel with outstanding speakers called “War No More Panel”.

Please continue to pray for Baronnelle Stutzman, owner of Arlene’s Flowers in Richland, as she stands for the freedom to live out our First Amendment right to religious liberty. Her courageous stand deserves our support in prayer and action. Please politely express your educated opinion on this issue to the office of Attorney General Bob Ferguson by calling 360-753-6200 or through the web by clicking here.

Also lift up continuing prayers for Ken and Lynn Stormans, owners of a pharmacy in Olympia, for their strong, persevering stand against participation in the abortion business.

Pray for Stutzman’s and Stormans’ legal counsel’s wisdom and God’s direction for righteous defense of their religious liberty. Pray for their continuing strength and courage and support from the believing Christian community. Praise God for the national attention brought to Stutzman’s case. Both of these cases are crucial in the battle to preserve “liberty and justice for all” as stated in our national Pledge of Allegiance. In both cases, there were multiple options for the customers to be served elsewhere, but Washington State has insisted that every person and business celebrate whatever the politicians and bureaucrats define as legally mandated, despite sincerely held religious or moral beliefs to the contrary.

This bill requires a parent to be notified before an abortion can be performed on a minor. This bill may come to the Senate floor within the week, so it’s critical that your voice is heard now.

Take Action: Call 1-800-562-6000 to send a message to your senator urging him/her to SUPPORT SB 5289. Or, contact your senator by email. To find out who your senator is and to send an email message click here.

This bill would force every insurance provider in the state to cover abortion on demand in every policy issued. It forces pro-life Washington residents to subsidize abortion through insurance premiums. This bill could also potentially be on the House floor within the next week, so your action is needed now.

Take Action: Call 1-800-562-6000 to send a message to your two representatives in the House, urging them to OPPOSE HB 1647. You can also contact your representatives by email, just click here.

As stated in last month’s alert, although CWA is hesitant to support anything that grows government, this bill would create an account dedicated to respond “to technology-facilitated child sexual exploitation and internet crimes against children”. In the interest of our families and our children’s innocence, we are supporting this bill as it moves through the system. The bill does not raise taxes but funds the task force through unclaimed prizes in the state lottery account.
Current status: March 3, placed on second reading by Rules Committee, which means it may be voted on any day.

Stand Up and Speak out!

CWA has Prayer/Action Chapters all around the nation. Through those chapters, we educate our members to enable them to pray and take action on issues related to our Biblical faith. When approached by the authorities and told to stop their public witness, Peter and the other apostles said, “We ought to obey God rather than men” (Acts 5:29). Can we do any less? Consider who you can unite in prayer for a chapter in your area and send in the attached Leadership Application!

Encourage a Legislator Campaign: It is not too late to pray for a state legislator! Please contact the state office to sign up!

“Let it be impressed on your mind that God commands you to choose for rulers just men who will rule in the fear of God.” Exodus 18:21

Please click here to renew your CWA membership for 2015 and/or hereto apply for a CWA leadership position.