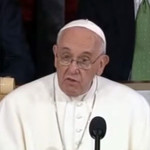 Just two days after the U.S. Senate voted down the Pain-Capable Unborn Child Protection Act, which merely seeks to protect children in the womb after it has been scientifically proven that they can feel pain (at 20 weeks), Pope Francis had the opportunity to send a decisive message about the injustice being committed in the U.S. with regards to abortion in his address before Congress.

Instead, he was strong in many other areas, but certainly not on abortion. It was very disappointing for many of us who value life and appreciate the Pope’s position in the church and the world.

Here is his only vague reference to abortion:

He then proceeded to specifically name the death penalty, while ignoring the injustice of abortion completely. Why?

More than fifty-five million babies have died at the hands of abortionists since Roe v. Wade in 1973.  The Death Penalty Information Center tells us there have been 1,414 death penalty executions in the U.S. since 1976.  And the Pope couldn’t be at least as strong on abortion as he was on the death penalty?

He could have helped the pro-life cause immeasurably. Take the issue of the horrible undercover videos exposing Planned Parenthood, the largest abortion provider in the country, selling baby hearts, lungs, brains and other baby parts for profit.  One of the main obstacles we have had with this issue is that the pro-abortion media is censoring these videos so that most Americans, still today, don’t know about them.  And some will not watch them because they distrust their content.

The Pope mentioning the issue could have changed all that for a lot of people.  He would have brought both awareness and legitimacy to the issue.  But he chose not to use his influence on this most important issue.  There is no question this was a wasted opportunity.

Some of my Catholic friends, whom I have great respect and love for, will no doubt defend the Pope’s remarks, saying he doesn’t need to go into specifics to be strong on an issue.  And I would agree.  But just think about this: there are many pro-choice, liberal people (as radically pro-abortion as they come) who would absolutely agree with the Pope’s call, “to protect and defend human life at every stage of its development.”

The statement is simply too vague.  Many pro-choice people would just define the “stages of development” differently.  It is why they call abortifacients “contraception.” The Pope must recognize this and be clearer on his remarks if he wishes to help the church in America fight this battle more effectively.

Vice-President Joe Biden thinks he is absolutely doing what the Pope asked,  while unequivocally supporting abortion.  Just a few days before the Pope came to the U.S., Biden said he believed life begins at conception. That’s Joe Biden, who many in the Democratic Party (which walks lock step with the abortion lobby and, especially, Planned Parenthood) want to see as their presidential nominee in 2016.

So, yes, the Pope’s words were so weak that everyone, no matter what side of the life issue they stand on, will be able to read into it what they want and use it for their own purposes.

We simply expected a lot more from Pope Francis.

Read more posts like this one on the Legal Blurb Blog at CWA’s Legal Studies page.