Kavanaugh On His Way to Confirmation – Hearing Update Day 2 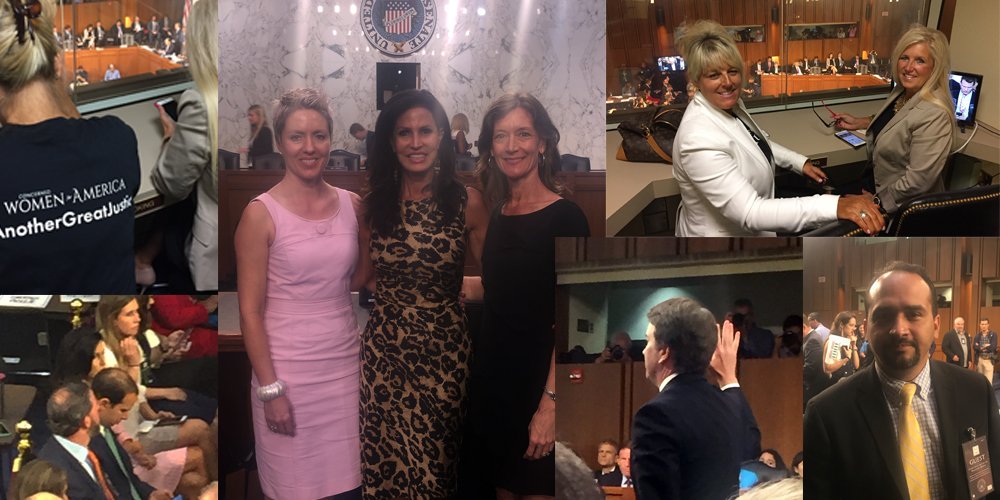 The stark contrast between Judge Kavanaugh and his detractors was in full display on the second day of hearings for his nomination to the U.S. Supreme Court. As senators started their first round of questioning, Judge Kavanaugh was engaging and approachable. He dealt evenly with those senators who questioned him most forcefully, as with those who praised his exemplary record.

His message was clear and concise. It can be summarized by this one statement to Sen. Hatch (R-Utah), “If confirmed to the Supreme Court, and as a sitting judge, I owe my loyalty to the Constitution. That’s what I owe loyalty to. The Constitution establishes me as an independent judge, bound to follow the law as written, the precedents of the Supreme Court as articulated, subject to the rules of stare decisis, and I would do so.”

Loyalty to the Constitution is what is desperately needed at the U.S. Supreme Court.

In discussions with Sen. Ted Cruz (R-Texas), he described what makes a good judge. He talked about being independent and impartial, and also about someone who takes the law as written. He talked about treating every litigant with respect, judicial temperament and work ethic, among several factors.

Here is a clip where he described a judge that is a judicial activist. He said it is, “[S]omeone who lets his or her personal or policy preferences override the best interpretation of the law.”

.@SenTedCruz to Judge Kavanaugh: “How would you describe a judicial activist?”

Kavanaugh: “I would describe a judicial activist as someone who lets his or her personal or policy preferences override the best interpretation of the law.” https://t.co/V1p73I7qvf pic.twitter.com/1lxFx7SYGX

On the other hand, the vulgar detractors continued to interrupt, disrupt and embarrass themselves with complaints about anything and everything but Kavanaugh’s record.

That is not to say they were focused on Kavanaugh’s record. Sen. Sheldon Whitehouse (D-Rhode Island), for example, decided it was appropriate to ask Kavanaugh about the Federalist Society and the types of policies Kavanaugh would enact for the selection of judges. He asked him about the Pacific Legal Foundation and the Judicial Crisis Network. He was appalled that some groups spend money on ads supporting judge Kavanaugh’s nomination. I was glad to hear Judge Kavanaugh point out that he and his family had seen a lot of ads opposing his nomination too. But, of course, that was not Sen. Whitehouse’s concern – the ones supporting him are the real problem.

In the end, Judge Kavanaugh proved, as Neil Gorsuch did at his hearings, he was the smartest man in the room. He was in his element, discussing the proper role of a judge, precedent, the Constitution and the many cases he has decided. Through it all, he was humble and in good spirits, despite the long hours that would start to weigh on anyone.

Bottom line is, Judge Kavanaugh is on his way to confirmation.

I said I’d have more on the fact that the shenanigans from Democrats being mildly reduced. Here is some of what transpired outside the hearing room where Democrats continued to pounce because they cannot stop the nomination of Judge Kavanaugh.

Senate Minority Leader Charles Schumer (D-New York) objected to a routine request that the Judiciary Committee be allowed to meet beyond the two-hour limit that is required by Senate Rules while they are in session.  Senate Majority Leader Mitch McConnell (R-Kentucky) was then forced to adjourn the Senate for the day, preventing senators from doing their jobs.

Schumer made it clear he was protesting the fact that they haven’t received all documents related to Kavanaugh.

It bears repeating that Sen. Schumer, within minutes of President Donald Trump’s announcement of Brett Kavanaugh’s nomination vowed to oppose him with everything he had. He literally needed no documents to make up his mind.

Not to mention the fact that, as noted in the hearings yesterday, the more than a half million pages of documents the Committee received for Judge Kavanaugh is more than the number of pages they received for the last five Supreme Court nominees combined.