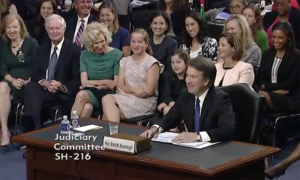 Radicals tried everything they could to steal this moment from Judge Brett Kavanaugh. They failed.

After Kavanaugh’s opening remarks (text and video below), the picture that emerges following Day 1 of Judge Kavanaugh’s hearing is one of a decent, intelligent, humble man with an unquestionable record that is more than qualified to serve as the 114th justice of the United State Supreme Court.

The man the American people met today bears no resemblance to the histrionics of radical groups fighting against the wind.

Please take the time to read and see the remarks for yourself.  Note his statement on the role of a judge:

He also said spoke of his faith and his service to others:

Throughout my life, I have tried to serve the common good, in keeping with my Jesuit high school’s motto, “men for others.” I have spent my career in public service. I have tutored at Washington Jesuit Academy, a rigorous tuition-free school for boys from low-income families. At Catholic Charities at Tenth and G, I serve meals to the homeless with my friend, Father John Enzler. In those works, I keep in mind the message of Matthew 25 — and try to serve the least fortunate among us. I know I fall short at times, but I always want to do more and do better.

Here is the video and transcript of his opening remarks:

Thank you, Mr. Chairman, Senator Feinstein, and Members of the Committee. I thank Secretary Rice, Senator Portman, and Lisa Blatt for their generous introductions. They are patriots who represent the best of America. I am humbled by their confidence and proud to call each of them a friend.

Over the past eight weeks, I have witnessed first-hand the Senate’s deep appreciation for the vital role of the American Judiciary. I have met with 65 Senators, including almost every Member of this Committee. Those meetings are sometimes referred to as “courtesy calls.” But that term understates how substantive and personal our discussions have been. I have greatly enjoyed all 65 meetings. In listening to all of you, I have learned a great deal about our country and the people you represent. Every Senator is devoted to public service and the public good, and I thank all the Senators for their time and their thoughts.

I thank President Trump for the honor of this nomination. As a judge and as a citizen, I was deeply impressed by the President’s careful attention to the nomination process and by his thorough consideration of potential nominees. I am also very grateful for his courtesy. At the White House on the night of the announcement, the President and Mrs. Trump were very gracious to my daughters, my wife, and my parents. My family will always cherish that night—or as my daughter Liza calls it, her debut on national television.

As a nominee to the Supreme Court, I understand the responsibility I bear. Some 30 years ago, Judge Anthony Kennedy sat in this seat. He became one of the most consequential Justices in American history. I served as his law clerk in 1993. To me, Justice Kennedy is a mentor, a friend, and a hero. As a Member of the Court, he was a model of civility and collegiality. He fiercely defended the independence of the Judiciary. And he was a champion of liberty. If you had to sum up Justice Kennedy’s entire career in one word … “liberty.” Justice Kennedy established a legacy of liberty for ourselves and our posterity.

I am here today with another of my judicial heroes … my mom. Fifty years ago this week, in September 1968, my mom was 26 and I was 3. That week, my mom started as a public-school teacher at McKinley Tech High School here in Washington, D.C. 1968 was a difficult time for race relations in our city and our country. McKinley Tech had an almost entirely African-American student body. It was east of the park. I vividly remember days as a young boy sitting in the back of my mom’s classroom as she taught American history to a class of African-American teenagers. Her students were born before Brown versus Board of Education or Bolling versus Sharpe. By her example, my mom taught me the importance of equality for all Americans—equal rights, equal dignity, and equal justice under law.

My mom was a trailblazer. When I was 10, she went to law school at American University and became a prosecutor. I am an only child, and my introduction to law came at our dinner table when she practiced her closing arguments on my dad and me. Her trademark line was: “Use your common sense. What rings true? What rings false?” One of the few women prosecutors at the time, she overcame barriers and was later appointed by Democratic governors to serve as a Maryland state trial judge. Our federal and state trial judges operate on the front lines of American justice. My mom taught me that judges don’t deal in abstract theories; they decide real cases for real people in the real world. And she taught me that good judges must always stand in the shoes of others. The Chairman referred to me today as Judge Kavanaugh. But to me, that title will always belong to my mom.

For twelve years, I have been a judge on the U.S. Court of Appeals for the D.C. Circuit. I have written more than 300 opinions and handled more than 2,000 cases. I have given it my all in every case. I am proud of that body of work, and I stand behind it. I tell people, “Don’t read what others say about my judicial opinions. Read the opinions.” I have served with 17 other judges, each of them a colleague and a friend, on a court now led by our superb chief judge, Merrick Garland. My judicial philosophy is straightforward. A judge must be independent and must interpret the law, not make the law. A judge must interpret statutes as written. A judge must interpret the Constitution as written, informed by history and tradition and precedent. In deciding cases, a judge must always keep in mind what Alexander Hamilton said in Federalist 83: “the rules of legal interpretation are rules of common sense.”

The Supreme Court must never be viewed as a partisan institution. The Justices on the Supreme Court do not sit on opposite sides of an aisle. They do not caucus in separate rooms. If confirmed to the Court, I would be part of a Team of Nine, committed to deciding cases according to the Constitution and laws of the United States. I would always strive to be a team player on the Team of Nine.

Throughout my life, I have tried to serve the common good, in keeping with my Jesuit high school’s motto, “men for others.” I have spent my career in public service. I have tutored at Washington Jesuit Academy, a rigorous tuition-free school for boys from low-income families. At Catholic Charities at Tenth and G, I serve meals to the homeless with my friend Father John Enzler. In those works, I keep in mind the message of Matthew 25—and try to serve the least fortunate among us. I know I fall short at times, but I always want to do more and do better.

For the past seven years, I have coached my daughters’ basketball teams. I love coaching. All the girls I have coached are awesome. And special congratulations to the girls on this year’s sixth-grade CYO championship team: Anna, Quinn, Kelsey, Ceane, Chloe, Alex, Ava, Sophia, and Margaret. I love helping the girls grow into confident players. I know that confidence on the basketball court translates into confidence in other aspects of life. Title Nine helped make girls’ and women’s sports equal, and I see that law’s legacy every night when I walk into my house as my daughters are getting back from lacrosse, or basketball, or hockey practice. I know from my own life that those who teach and coach America’s youth are among the most influential people in our country. With a kind word here and a hint of encouragement there … a word of discipline delivered in a spirit of love … teachers and coaches change lives. I thank all of my teachers and coaches who got me to this moment, and I thank all of the teachers and coaches throughout America.

As a judge, I have sought to train the next generation of lawyers and leaders. For 12 years, I have taught constitutional law to hundreds of students, primarily at Harvard Law School. I teach that the Constitution’s separation of powers protects individual liberty. I am grateful to all my students. I have learned so much from them. And I am especially grateful to the dean who first hired me, now-Justice Elena Kagan.

I am grateful to have my family behind me. My mom rightly gets a lot of attention. So a few words about my dad. He has an unparalleled work ethic, and the gift for making friends with everyone, regardless of who they are or where they come from. We are both passionate sports fans. When I was 7, he took me to the 1972 NFC Championship Game at RFK Stadium just two miles from here—upper-deck Section 503, Row 3, Seats 8 and 9. When I was 17, we sat in the same seats for the 1982 NFC Championship Game. In 1995, when I was 30, we were at Camden Yards together when Cal Ripken played in his 2,131st consecutive game and broke Lou Gehrig’s seemingly unbreakable record. And so many other games with my dad. A lifetime of friendship and memories, forged in stadium seats over hot dogs and beer.

My daughters Margaret and Liza will be in and out of this hearing room over the next few days. In the time since you last saw them at the White House, I am pleased to report that Margaret has gotten her braces off and has turned 13. As for Liza, well, I tell her every night that no one gives a better hug than Liza Kavanaugh.

Finally, I thank my wife Ashley. She is a strong West Texan, a graduate of Abilene Cooper Public High School and the University of Texas at Austin. She is now the popular town manager of our local community. This has not exactly been the summer she had planned for our family. I am grateful for her love and inspiration. Ashley is a kind soul. She always sees the goodness in others. She has made me a better person and a better judge. I thank God every day for my family.

Mr. Chairman, Senator Feinstein, and Members of the Committee, I look forward to the rest of the hearing and to your questions. I am an optimist. I live on the sunrise side of the mountain, not the sunset side of the mountain. I see the day that is coming, not the day that is gone. I am optimistic about the future of America and the future of our independent Judiciary. I revere the Constitution. If confirmed to the Supreme Court, I will keep an open mind in every case. I will do equal right to the poor and to the rich. I will always strive to preserve the Constitution of the United States and the American Rule of Law.