By Ashley TraficantJanuary 31, 2020Blog, News and Events, Support for Israel 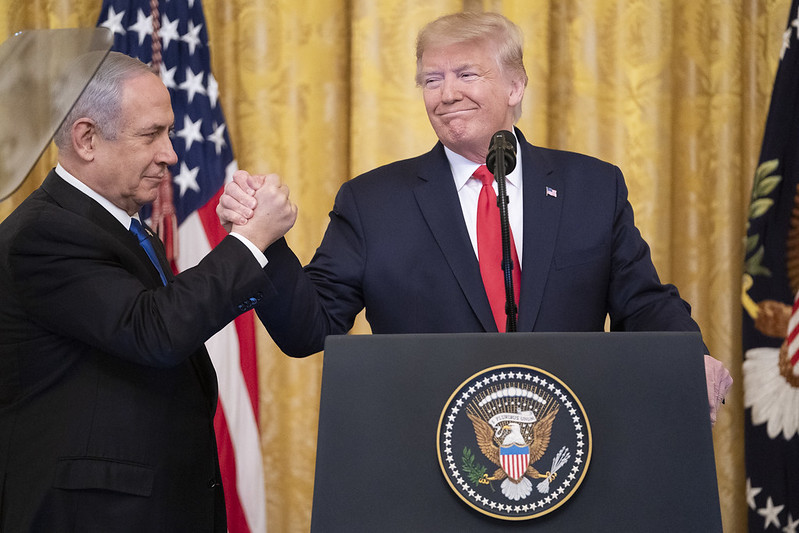 President Trump announced a historic new peace plan for the Israeli-Palestinian conflict on Wednesday. He did this alongside Israeli Prime Minister Netanyahu, after meeting with Netanyahu’s political rival for the position of PM, General Gantz. Both Netanyahu and Gantz committed to using this plan as the basis for future negotiations with the Palestinians.

Trump’s “Peace to Prosperity” is the most detailed plan yet, professing to be more comprehensive and “realistic” than the Oslo Accords of the 1990s with the goal of safeguarding Israel’s security and bringing prosperity and opportunity to the Palestinians. This plan lays the groundwork for negotiations by diving into some of the most complex aspects of the Israeli-Palestinian conflict. It aims not only “… to end the conflict, (but also) unlock the vast human potential and economic opportunity that peace will bring to Israelis, Palestinians and the region as a whole … given the realities on the ground and in the broader Middle East.”

Chief among these complexities are the suggested borders of a “realistic two-state solution” that gives the Palestinians self-governing authority but “not the powers to threaten Israel.” This is the first time Israel has agreed to tangible lines on a map as a starting point for negotiations in order to progress towards a two-state solution. A conceptual map of what a potential future state of Palestine might look like is included in the plan.

The plan centers on three initiatives to support the economy, people, and government of a “prosperous and vibrant Palestinian society”. However, there are preconditions the Palestinians must meet to be eligible for statehood. As a sign of good faith, Israel has agreed to a four-year freeze on settlements or development on land proposed to be part of a Palestinian state. This gives the Palestinians time to meet the requirements which include reforming their banking system, ending support for terrorism, building their infrastructure and civil society, and negotiating for peace.

The plan includes $50 billion in commercial investment in a future Palestine. This would cut the poverty rate of Palestinians in half which could also serve as a deterrent or alternative to terrorism with better options for the future. These investments would economically connect the Palestinians to the Israelis, as well as with the rest of the region and world. Economic ties disincentivize violence in conflict areas by creating a common interest.

Another historic milestone is support for the plan by Arab neighbors in the region. Both Saudi Arabia and the UAE are encouraging Palestinian leaders to use Peace to Prosperity as the starting point for negotiations. Ambassadors from Bahrain, Oman, and the UAE attended the announcement of the plan at the White House, reflecting how the tremendous importance of peace extends beyond the Israelis and Palestinians to the region.

It may be that current U.S. challenges with Iran ripened the timing of this plan. Iranian general Qassem Soleimani oversaw Iran’s control of Hamas and Hezbollah who operate and even run parts of the Palestinian territories. A peace plan, especially one supported by the Gulf States, diffuses and perhaps eliminates Iran’s reach into Gaza and the West Bank.

The President has taken decisive action in successive steps that curates an opening for peace. CWA International Affairs is assessing the historic plan and will look for ways to engage in its success. We ask that you pray with us for wisdom for the U.S. administration and for Israel, and that all parties seize this historic moment for the peace and prosperity of the Israelis, Palestinians, and the region.