Ham vs. Nye: More Than Meets the Eye

I’m a 90’s kid. We may have trouble getting jobs, but we can sing “Bill Nye the Science Guy” theme song without a second thought. I grew up watching the happy-go-lucky Bill Nye on TV, but for the first time ever, I had sorrow as I watched and heard the emptiness in the scientist’s claims.

Ken Ham and Bill Nye went head to head in an origins debate held at the Creation Museum. In his argument, Ham stated that society’s first mistake is calling it a debate between “scientists vs. creationists” — insinuating that creationists are not scientists. In reality, there are numerous well-respected scientists who support the Creation model. Why is Creationism simply categorized as a religious belief, when Evolutionism is considered science? If Atheism is the belief that there is no Creator, then Evolutionism is a type of Atheism and, therefore, a religious belief. Regardless, evolutionism is almost unquestioned by public schools today. Take a look at your child’s textbooks — authors rarely dedicate a paragraph to Creationism. 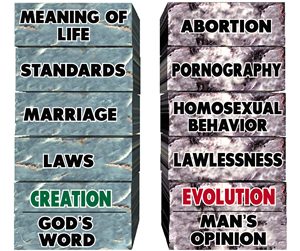 In his 30-minute speech, Ken Ham showed this diagram to promote the idea that the sides of the debate are clearly a worldview issue beginning at separate bases. Both use the same evidence, but each sees the observations through a different lens.

Ken Ham and Bill Nye can argue over records all day. What’s interesting is that this debate is not just over experimental data, but the core of every man’s purpose and moral code. THAT is why the issue attracts so much attention; this debate alone attracted hundreds of thousands of people. Judging between the two pillars in the diagram, the values based on man’s opinion — abortion, pornography, and the breakdown of the family structure — have all proven fatal to society.

Today, scientific creation, as described in the Book of Genesis, is perfectly consistent with all known laws and evidence, and the substantiation is overwhelming. Each new biological observation, down to the tiniest human cell, shows traces of intelligent design. Sure, evolution can try and explain human origin, but the theory does not satisfy man’s curiosity to discover one’s purpose.

Bill Nye even states that, “It’s hard for many of us to accept that when we die, it’s over.” The emptiness in his voice showed that humans want a reason for their existence. Even evolutionists are looking to quench a hunger this earth simply can’t satisfy. Oddly enough, they ignore the scientific evidence that points towards an out-of-this-world Designer, because it’s termed “religious.” Maybe it’s time we change our terminology. Creationism is a viable model that promotes a moral law for society to follow and gives meaning to life, and THAT is something that a Bill Nye experiment cannot dispute.

Today’s guest author is Hannah Wegman, an intern with Concerned Women for America’s (CWA) Ronald Reagan Memorial Internship Program. To learn more about interning with CWA, click here. You can follow Hannah on Twitter at @hwegman30.