Grassley: No hearings on Supreme Court nominee this year 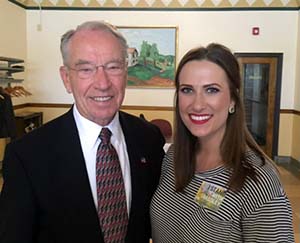 Janae Stracke, CWA’s Communications Coordinator and a native Iowan, attended Senator Grassley’s last town hall meeting for the year in Jones County Iowa yesterday. She spoke on behalf of Concerned Women for America to support the senator and his stance to give “We the People” a voice regarding the next Supreme Court justice appointment. Our voices will be heard through the presidential election in November. She was quoted in an Iowa newspaper following the meeting:

Janae Stracke of Concerned Women for America, who was sporting an “I stand with Grassley” sticker, thanked him “wholeheartedly (because) we don’t need a Supreme Court full of judicial activists as we have been seeing.”

“We need to make sure Justice Scalia’s position is filled with a strict constitutionalist,” she said. As a millennial, Stracke said she understands the next justice will affect her and her children for years to come.