Gorsuch One Step Closer to the Supreme Court 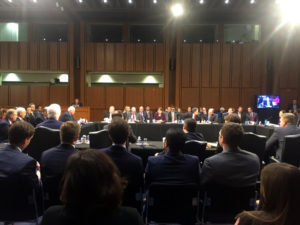 It was a painful executive meeting at the Senate Judiciary Committee today where Judge Neil Gorsuch was voted favorably out of committee 11-9 on a straight partisan vote.  Democrats struggled to justify voting against such a well-qualified nominee, and they failed miserably.

In a time of extreme political dysfunction and gridlock, the confirmation of Judge Gorsuch should be a point of unity. Judge Gorsuch has garnered widespread, bipartisan support for his confirmation due to his character, sharp intellect, jurisprudence, and impartiality. He is the embodiment of an ideal justice – one who is faithful to adhere to the text of the law when making decisions, regardless of his personal or political views.

The procedure in the Senate is very simple, despite what you hear from the biased media.  Democrats have already confirmed they will try to filibuster Judge Gorsuch, which only means that Sen. McConnell will have to do what Sen. Reid did back in 2013.  He will move to use the “nuclear” or “constitutional” option that will simply ensure a nominee can be confirmed by a simple majority, bypassing the 60 votes that were needed to end the debate on a topic before Sen. Reid changed the rules back then.

After that procedural vote to do away with the 60 vote threshold is passed, the Senate will finally vote on the substantive nomination where Judge Gorsuch already enjoys bipartisan support.

Sens. Joe Donnelly (D-Indiana), Heidi Heitkamp (D-North Dakota), and Joe Manchin (D-West Virginia) have already committed to do the honorable thing and vote for Judge Gorsuch.  They should be commended, along with all Republican senators who have shown strong support for the nominee all along.

Please remember to contact your senators and ask them to support Judge Gorsuch.