Gorsuch in Little Sisters of the Poor 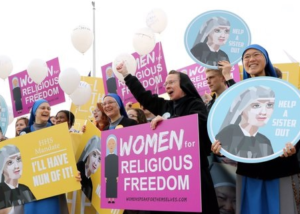 I’ve already highlighted for you Judge Neil Gorsuch’s admirable judicial instincts and philosophy as he concurred in the Hobby Lobby religious liberty case.

Another example of his clear thinking in this area of the law comes to us through a wonderful dissent he joined in the Little Sisters of the Poor case.  Written by Judge Harris Hartz and joined by Judge Gorsuch and three other judges, the dissent took a strong stance for our constitutional rights to religious freedom, emphasizing that “[I]t is not the job of the judiciary to tell people what their religious beliefs are.”

But that is what the majority did.  While it did not doubt the sincerity of the Little Sisters of the Poor, it concluded they didn’t really object to signing a form to facilitate the distribution of contraceptives and abortifacients it considered sinful, it was the actual distribution of them, so it wasn’t really an imposition on their religious liberty.

The opinion of the panel majority is clearly and gravely wrong — on an issue that has little to do with contraception and a great deal to do with religious liberty. When a law demands that a person do something the person considers sinful, and the penalty for refusal is a large financial penalty, then the law imposes a substantial burden on that person’s free exercise of religion.

That much was clear.  But the majority called the objection a mere derivative of a core belief.  The dissent raised the troubling concern with the view with one simple question, “Could we really tolerate letting courts examine the reasoning behind a religious practice or belief and decide what is core and what is derivative?”

The clear answer is “no.”  And, not only does common sense dictate this (which it does), but Supreme Court precedent demands it, too (which is the more important question for a judge, whatever his personal beliefs).  The dissent again:

The Supreme Court has refused to examine the reasonableness of a sincere religious belief — in particular, the reasonableness of where the believer draws the line between sinful and acceptable — at least since Thomas v. Review Board of Indiana Employment Security Division, 450 U.S. 707, 715 (1981), and it emphatically reaffirmed that position in Burwell v. Hobby Lobby Stores, Inc., 134 S. Ct. 2751, 2778 (2014).

Still, the majority, compelled by strong feelings no doubt, ruled against denying a rehearing of the Little Sisters of the Poor case.

The dissent, though, was not fazed by the majority’s opinion refusal to adhere by clear precedent, concluding, “Fortunately, the doctrine of the panel majority will not long survive. It is contrary to all precedent concerning the free exercise of religion.”

They (including Judge Gorsuch) were, of course, ultimately proven right by the U.S. Supreme Court.