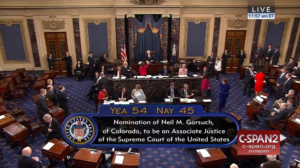 You did it.  The U.S. Senate has just confirmed Judge (now Justice) Neil Gorsuch to be the 113th Justice of the U.S. Supreme Court.  This is great news for all Americans, whatever their political affiliation.

Justice Gorsuch is the type of judge who will strive for judicial restraint and has demonstrated he respects the Constitution as written.  This is all we can hope for in a Justice of the Supreme Court.

He was confirmed by a bipartisan majority 54-45.  The 45 voting against him played to their extreme, radical base, but they failed miserably to present any credible evidence that their vote was a sincere reflection of Judge Gorsuch’s record.  It was shameful to see them behave in this way.

Still, Justice Gorsuch is on to the Supreme Court and reports tell us he will be ready to tackle the important cases that are set to come before the court this month.  Let us continue to keep him and his family in prayer.

A lot of the credit of this nomination has to go to President Donald Trump for keeping his promise and nominating someone in the mold of the late, great Justice Scalia.  Also to Senate Majority Leader Mitch McConnell (R-Kentucky) who led the senate through a flawless process that ultimately got us such a qualified nominee on the court.

Penny Nance, Concerned Women for America’s (CWA) CEO & President, thanked them both on behalf of CWA members around the country in her statement:

On behalf of our members, I want to thank Leader McConnell, as well as Sen. Grassley, for their decisive leadership, which gave the American people a voice in November on the kind of justice they believed should fill the Supreme Court vacancy.

I also want to thank President Trump for keeping his promise to nominate a constitutionalist judge to the Supreme Court. It is hard to imagine someone better suited to serve on our nation’s highest court than Judge Gorsuch.