Good Work on Judges Must Continue in 2018 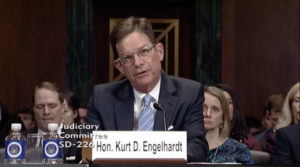 The work on the confirmation of constitutional judges was by far the best news of 2017. Not only did we confirm an exemplary candidate in Justice Neil Gorsuch to the U.S. Supreme Court, but President Donald Trump also set the record for federal appellate court appointments in the first year of a presidency with 12. He also confirmed six impressive district court judges.

But the reality is that, though impressive, this is but a drop in the bucket coming out of the previous eight years of President Obama’s radical judges.

In his eight years in office, President Obama appointed a total of 334 judges.  He appointed two Supreme Court Justices, 55 appellate court judges, 268 district court judges, and nine others to lesser known court, like the Court of Federal Claims.

Recall that, as a pre-requisite, President Obama wanted judges who did not focus on the law but on empathy towards specific classes of people. This type of liberal judicial activism on such a big scale will not be easy to counteract. It most certainly won’t happen if the Senate loses focus and relents, instead of building on, the work they started in 2017.  Rest assured, the liberal side of the aisle will not relent on its obstruction of judicial nominations.

But given the Senate’s current makeup, and former Democratic Senate Majority Leader Harry Reid’s petulant rush to abolish the filibuster for judicial nominees, they should be able to overcome every obstructionist tactic thrown at them. Consistency and endurance will be the majority’s biggest challenge.

That’s where you and I can make a difference by remaining engaged and reminding our elected officials how important it is that they continue, and perhaps increase, the current pace on judicial nominations.  It is also important for us to consider this issue as elections for the U.S. Senate approach this November.

The good news is that, up until now, Majority Leader Mitch McConnell (R-Kentucky) and Judiciary Committee Chairman Chuck Grassley (R-Iowa) have shown no sign of fatigue.  Following up on their extraordinary work in 2017, they confirmed four more district judges last week, holding hearings for another four.