Fighting for Justice in Judicial Nominations 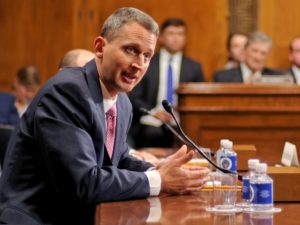 The radical left’s unjust definition of justice prevents it from impartiality, the very essence of the role of a judge. Its partisan opposition to any and all of President Trump’s judicial nominees is a prime example.

One nominee, Kyle Duncan, who has been nominated to the U.S. Circuit Court of Appeals for the 5th Circuit, has been especially targeted by the left because of his involvement in protecting religious freedom and the rights of conscience in relation to one of the left’s holy grails, same-sex marriage.

Duncan is an exemplary nominee. His temperament and judicial philosophy, as with Justice Neil Gorsuch, is tailor made for the judiciary. He strongly believes a judge should interpret law and not write law to accomplish personal social, cultural or political aspirations. He is the type of judge both left and right should champion.

His academic and legal preparation is also stellar.  His undergraduate and law degree are both from Louisiana State University — his home state and the region that is overseen by the 5th Circuit. He also has a Master of Law (LL.M) from Columbia. He clerked for Judge John M. Duhe, Jr., also on the 5th Circuit. He has served as Assistant Solicitor General at the Texas Attorney General’s Office, and as Solicitor General for the State of Louisiana.

But it is his work as General Counsel for The Becket Fund for Religious Liberty that has many in the left hysterically protesting him. As lead counsel in the landmark Burwell v. Hobby Lobby decision, which protected the rights of conscience and religious liberty for business owners, Duncan has become a target for the radical left. He also admirably defended Louisiana’s marriage laws, and that is also an unpardonable sin to them.

So, the left wants to smear this great nominee’s character, regardless of the truth of the claims they make. He is a “hater.”

I will let Paul Baier, his opponent in the same-sex “marriage” litigation, set the record straight. Here is what  he wrote in a recent op-ed for The Hill:

Having battled on the front lines in the same-sex marriage litigation, I can attest to the passionate disagreement and often contentious nature of the issue. Emotions were particularly raw when I litigated opposite Kyle in the immediate wake of Justice Kennedy’s opinion in Obergefell.

Through it all, however, I always appreciated and respected Kyle’s advocacy for his client and his respect for the humanity of the same-sex couples who would be most affected by the case. While I disagreed with many of his arguments, often emphatically, I never found a trace of bias, bigotry, or any disrespect towards the same-sex individuals in the case.

Both of us strove mightily as adversaries. But we continue to eat and drink as friends.

Kyle knows well the difference between the advocate’s role for his client (in the same-sex marriage case, the State of Louisiana) and what he would be called upon to decide as a judge on the Fifth Circuit. I maintain this view of Kyle even after having faced off against him in the highly charged atmosphere of same-sex marriage litigation. His ability to act as a judge and not advocate will surely carry over to other questions of public importance facing the Fifth Circuit.

As an appellate lawyer, Kyle Duncan is uniquely qualified. I have long taught Appellate Practice and Procedure at LSU Law Center, where I have my students listen to Kyle’s successful U.S. Supreme Court argument in Connick v. Thompson.

The left’s hollowed, emotional opposition to this nominee is a great injustice and should be emphatically rejected.  Even the liberal American Bar Association rated him “well qualified,” their highest rating.

The Senate should confirm Kyle Duncan as soon as possible.