By CWALAC StaffJune 13, 2014Blog, News and Events, Support for Israel 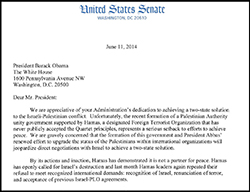 In late April, Israel made the decision to suspend peace talks with the Palestinians when the divided factions of Palestine — Fatah in the West Bank and Hamas from the Gaza Strip, which has continuously attacked Israel — announced plans for a unified government. Now, in a letter of “grave concern,” 88 senators spanning both sides of the political aisle are addressing the issue with President Obama.

The letter reminds President Obama, who has recently taken to unlawfully bypassing Congress, that current appropriation’s law calls for an end to Palestinian assistance if Hamas ever shares political power or exerts “undue influence” over its government. “Any assistance,” the senators write, “should only be provided when we have confidence that this new government is in full compliance with the restrictions contained in current law.”

The American Israel Public Affairs Committee (AIPAC) helped spread the letter on Capitol Hill and, for those interested, has a two-and-a-half minute video primer titled, “Understanding Hamas.” The video, narrated by AIPAC Assistant Director for Policy and Government Affairs Jonathan Harris, sums up the group’s stated goals, the means by which they intend to achieve those goals, and why the inclusion of Hamas in the Palestinian government precludes the recognition of a Palestinian state. Simply put, “Hamas prefers terror over peace.”

How the president will respond to the senators’ letter, however, is anyone’s guess.

Yes, indeed. With a president who seems to be more of a sympathizer with the violent “religion of peace,” these are definitely times of “grave concern.”