Sentenced to Death for Loving Christ 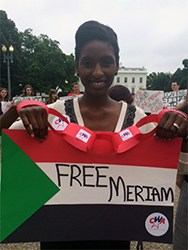 Marches begin today at the White House to provoke President Obama to action in freeing Sudanese woman, Meriam Yahya Ibrahim. The Institute for Religion And Democracy invited organizations of like-minded faiths and values to come together on her behalf to offer compelling declarations and prayers that would move the hearts of the people and world leaders to compassionate, just action. Concerned Women for America was there to join those on mission for religious freedoms, including Senator Ted Cruz and Tony Perkins, president of Family Research Council and Faith McDonnell of the Institute for Religion And Democracy. CWA CEO and President Penny Nance led the way for calling attention to the specific cause of Meriam’s predicament:

“Today we are here to talk about Meriam Ibrahim, who is being imprisoned for her faith, specifically because she is a Christian. And not just her, but also her two children, one of which she gave birth to in chains.  As Christian women, we are talking today about Sudan but also pointing to the plight of women around the world. Women of faith are being persecuted and little girls are forced into marriages at very young ages. Meriam shines a light on this corruption and persecution”

This is a defining moment in American history, as the world looks to us, the beacon of freedom, a city on hill as Reagan called us, to stand up for what is right and not let evil triumph. Political philosopher Edmund Burke once said “All that is necessary for the triumph of evil is that good men do nothing.” We will do something.

“We are an exceptional nation; we love our country; we believe in our values, especially religious freedom and we want everyone to share in that God-given right, not from the White House, but from our Creator. We are standing here today to speak for someone who is our sister in Christ who cannot speak for herself. We also pray for the Nigerian girls. Hashtag diplomacy is not enough. We want to see results.”

Join the fight against true intolerance and persecution for one’s religious convictions. Our Lord and Savior commanded us to do to others what you would have them do to you (Matthew 7:12). Get involved by signing our petition, urging action on Meriam’s behalf. Click here and sign today!