Dethrone Game of Thrones from Your Life 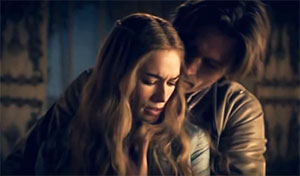 Viewership for one episode of HBO’s grotesque fantasy television series Game of Thrones has surpassed 23 million for one episode. The series is based on George R.R. Martin’s book series A Song of Ice and Fire, which HBO has purchased to produce, showing much pride because of its gratuitous nudity and sexual violence.

One does not even need to go to Christian articles and reviews to show how horrifying and sick this show and its video game are.  Even non-Christians and secular media outlets have noticed the depravity of this show, especially in its treatment of women. When that happens, you know something is desperately wrong.

In previous seasons, a queen was frogmarched naked in public to cries of “Shame!” A young princess was burned at the stake. Women have been sexually exploited in brothels and royal bedrooms alike, building the show’s reputation for gratuitous female nudity. Outrage erupted last year after a scene depicting a wedding-night rape.”

Critics and even cast members are fully aware of the show’s filth:

In earlier seasons of Game of Thrones, critic Myles McNutt used the term “sexposition” to describe the nudity and sex in some scenes that set up complex plot lines. Ian McShane, who appeared on Game of Thrones this season, dismissed the series as “tits and dragons.” Writing in the Atlantic last year, Christopher Orr said the show’s pattern of treating female characters poorly was too ingrained to change.

One viewer records her reasoning to stop watching the show:

The highly controversial scene that ultimately caused me to step away from the series featured Jaime Lannister sexually assaulting his sister, Cersei — a scene that George R. R. Martin had intended as consensual in the books. When viewers questioned the decision to change the scene from reciprocal to nonconsensual, director Alex Graves and showrunner David Benioff refuted the idea that the scene in question was, in fact, sexual abuse. Despite that at one point in an interview, Graves referred to the act in question as “forced sex.” Despite that Benioff, in the video diary of the episode, said, “It becomes a really kind of horrifying scene … and you see that Cersei is resisting this. She’s saying no, and he’s forcing himself on her.”

The past six series, and the probable one or two more, contain an astonishing amount of vulgarity and nudity, explicit sexual intercourse and forced sexual violence where the woman’s deafening screams of “No” should make one regret ever voluntarily watching one of these eight million dollar episodes.

The sickeningly high ratings are extremely saddening, especially when one reflects on the number of Christians consuming this sort of content on a regular basis.  The show’s popularity reflects the God-less, disrespectful, individualistic, “truth-and-morality-are-relative” society we live in today. Sadly, millions of these viewers, both men and women, enjoy this type of fantasy; they are stimulated by horrifying scenes that should repulse them, without realizing that these scenes will inevitably affect their view of humanity. Whether the sex scenes are passionate, or the plot encourages rape and incest, this type of content affects the viewers’ implicit desires, standards and reality.

Game of Thrones uses sexual violence, rape and incest — all presented in an incredibly graphic and uncensored way for shock value and higher ratings. This passes for “entertainment” in today’s day and age.

But, when one reflects on the millions of women who have suffered from the physical and emotional trauma of a sexual assault, we should weep for our culture and the Church.

As followers of Jesus Christ, we should reject this type of demeaning content.  We are called to be holy; to live in this world, but not of it; to live righteous lives. “Just as He who called you is holy, so be holy in all you do” (1 Peter 1:15).

Church, it is time to step up and speak out.  Let us dethrone Game of Thrones from our lives.
—
Kelsey Gold is part of CWA’s 2016 Ronald Reagan Memorial Internship class where she serves for the Legislative Department.