Transgender Experimentation in the U.S. Military 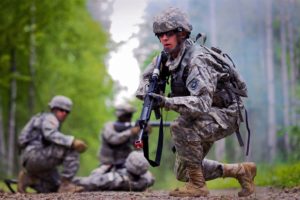 Last week, the Obama Administration lifted the ban on transgender individuals openly serving in the military, proving again where their priorities lie. The Department of Defense (DOD) transgender policy changes will be fully implemented within one year, including a “commander’s guide book” for military leaders with instructions on how to handle those in military service identifying as transgender, as well as required transgender accommodation training for all military personnel. Additionally, military treatment facilities will now cover transgender medical services. While the DOD claimed they had worked with the Armed Services and top officials in framing these new policies over the past year, Sen. John McCain, war veteran and Chairman of the Senate Armed Services Committee, said he had never been consulted in these discussions, nor received any prior briefing on these changes, as there will be legislation needed in order to accommodate them. Despite the blatant contempt for Congress the Administration shows with this move and others in the past, the implications of such policies are dangerous not only for the security of our country and servicemen and women, but for those struggling with their “gender identity.”

With the growing threat of ISIS, the Middle East in complete chaos, North Korea threatening with long-range missiles, and Putin’s hostile and increasing influence, our military will spend the next year learning how to accommodate gender dysphoria. We will spend a considerable amount of our scarce resources imposing a social agenda on our military.

Our initial accession policy will require an individual to have completed any medical treatment that their doctor has determined is necessary in connection with their gender transition, and to have been stable in their preferred gender for 18 months, as certified by their doctor, before they can enter the military.

Yet under these new guidelines, one can decide they identify with the opposite sex after they join the military and then be able to have their sex-change surgery covered by the taxpayer. We have 4,000 active duty and reserves servicemen and women identifying as transgender. Our military men, women, and veterans who struggle with gender dysphoria do not need affirmation or assistance from our government to validate and aid their confusion. They need mental health support, and we are denying them the true help they need.

Not only will this bring harm to both military readiness and to those struggling with gender dysphoria, these new policies will also put our active duty servicemen and women at risk. Broad policies such as these leave room for sexual predators to use them for their advantage. In 2014 the RAND National Defense Research Institute conducted an assessment of the rates of sexual assault, sexual harassment, and gender discrimination in the military at the request of the Department of Defense Sexual Assault Prevention and Response Office. In this report, they found approximately 20,300 men and women in the military were sexually assaulted, and of those only 4,768 cases were reported, about 1 in every 4. They also discovered the “incentive to report” is low, finding that 52 percent of active servicewomen claimed they experienced professional and social retaliation for reporting their assault. Allowing people to change their gender identity in the military will allow sexual predators to “identify” with the opposite sex and be granted living space among them in their personal quarters, giving the predators that much more access for sexual assault. Forcing the acceptance of one’s change in their “gender identity” opens the door for more sexual assault and harassment cases among our military men and women, further detracting from military readiness.

I am thankful to anyone who signs up to defend our great nation, no matter their gender, race, their political ideology, or what have you. I understand there are brave men and women who have served our country and at the same time are confused with regards to their gender identity. But it is not the place of our Department of Defense to affirm their confusion.  Instead, they should encourage them to get the help they need.  The Obama Administration putting their military social experiments over the needs of our security and the well-being of our servicemen and women is both shameful and dangerous. The priorities of the Department of Defense have shifted from military readiness to political correctness, and we will all suffer for it.

We seem to be fiddling while Rome burns.