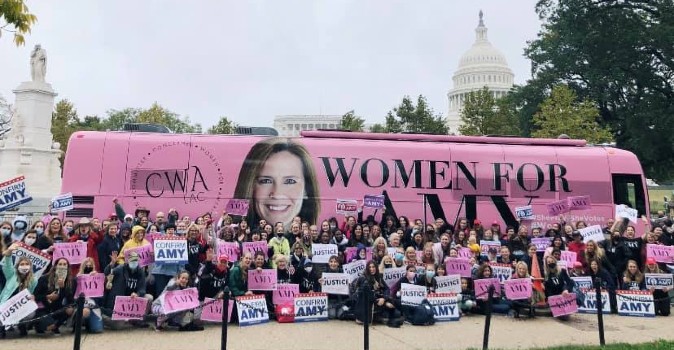 Washington, D.C. – As participants in this year’s Women’s March prepare to send what they call “an unmistakable message about the fierce opposition” to the confirmation of Judge Amy Coney Barrett to the United States Supreme Court, there’s no mistaking this fact: they don’t represent all women.  Concerned Women for America Legislative Action Committee’s (CWALAC) CEO and President Penny Nance has this to say:

“Amy Coney Barrett is going to be the next Supreme Court Justice. She is a woman of character and uniquely qualified for this moment. Her sincere faith, strong marriage, and devotion to family make her an ideal role model for young conservative women who aspire for both family and career achievement.

“Sen. Lindsey Graham (R-South Carolina) is right; soon to be justice Barrett breaks not a glass ceiling but a concrete barrier reinforced by women on the left in order to exclude women with conservative views. No more must women conform to the litmus test of progressivism to sit at the ‘cool kids table.’  Americans reject the religious bigotry and abortion dogma that has been the standard required from women in order to attain achievement in government. The confirmation of Amy Coney Barrett to the Supreme Court creates a new definition of feminism and creates a seat at the table for us.

“The year 2020 is the year of the conservative woman. While some will be marching to thwart the confirmation of Amy Coney Barrett, Concerned Women for America Legislative Action Committee is continuing their Women for Amy Bus Tour, where we’ve experienced overwhelming support around the nation in key battleground states for an accomplished, conservative women like her and for the confirmation of soon to be Justice Amy Coney Barrett.”

For information on the “Women for Amy” bus tour, please go here.