CWA Representing You in the Senate 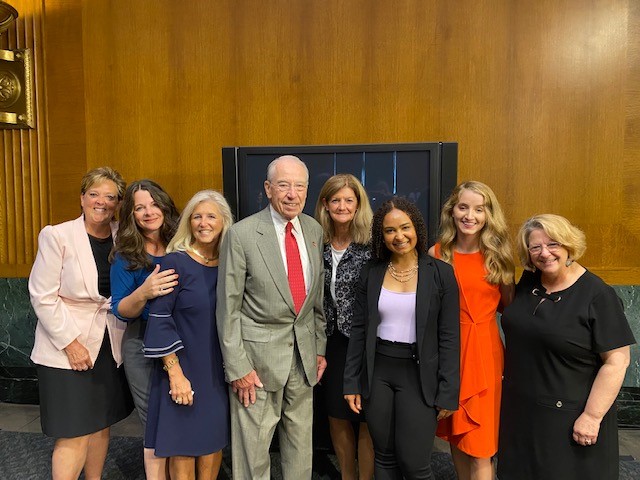 Congress has returned from recess after the recent Supreme Court decision, Dobbs v. Jackson’s Women’s Health Organization, which released us from the death grip of Roe v. Wade and Planned Parenthood v. Casey and leaves the question of abortion policy to the people and their elected representatives. The U.S. Senate and House scheduled multiple hearings on Dobbs. Concerned Women for America (CWA) had front row seats to the hearing in the Senate Judiciary Committee, the first of five congressional hearings in the first work week following Dobbs. The Senate Health, Education, Labor and Pensions, House Oversight and Reform, House Judiciary and House Energy and Commerce committees also had hearings.

Concerned Women for America and Young Women for America (YWA) leaders from Iowa, Louisiana, Texas, Missouri, and Arkansas were there to represent the women back home who have prayed for years for a decision like Dobbs. The leaders had the opportunity to meet with Ranking Member Chuck Grassley (R-Iowa) to share their thanks for standing for the sanctity of life. This is only the tip of the iceberg of ways that CWA and YWA are championing the cause for life in their respective states.

There is so much work that goes unnoticed, and this is only a small sample of some of the work our leaders have done in select states across the country. We thank each of you for being part of the movement that brought about this great post-Roe era. You oversee the most important work for life—the work that happens at home. But there is much work to be done, and we will continue to equip you to fight for a day when abortion is not only illegal but unthinkable.