By CWALAC StaffMarch 2, 2018Blog, Defense of Family, News and Events 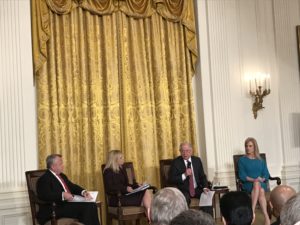 Today I sat in the East Wing of the White House with eyes full of tears as a father shared the story of his son who he lost to an opioid addiction. He thanked the President and First Lady for the opportunity to be there and share his story – “I’m amazed that my journey has taken me from my son’s room where he died to this room in the East Wing of the White House, but I would give this all up for five more minutes with my son, just five more minutes.”

On Thursday, March 1, the White House hosted a summit addressing the opioid crisis facing our nation. First Lady Melania Trump delivered the opening remarks and invited a mother to join her on stage as she read the letter this woman had written to her about the passing of her son. That mother represents the thousands of family members who lose loved ones every year from opioid overdose.

The drug epidemic is a concern of CWA as we strive to advocate for and support the American family. It was such a valuable opportunity to be able to sit in that room with members of our government, police chiefs from across the nation, and individuals whose lives have been personally impacted by this crisis.

The summit included two panels each moderated by Counselor to the President, Kellyanne Conway. The first was on Prevention, Treatment, and Recovery with Secretary of Health and Human Services (HHS) Alex Azar, Secretary of Housing and Urban Development (HUD) Ben Carson, and Secretary of Veterans Affairs David Shulkin.

Highlights you need to know:

HHS is doubling state grants that will be spent on addiction recovery.

Sec. Carson shared about HUD’s new EnVision Centers which implement holistic approaches to foster long-lasting self-sufficiency for those in recovery.

AlphaBay, one of the largest dark web marketplaces for the sale of drugs, has been shut down.

While cabinet members shared what their departments are doing to address the drug epidemic, the majority of the summit was an opportunity for members from the audience to share their journeys of recovery, their ideas for reform, and their stories of lost loved ones.

The opioid epidemic is personal to Americans. It does not discriminate. As Secretary Ben Carson said, “This is not an ‘us’ and ‘them’ situation. It could become any of us – it is so easy. Unless it’s as easy to secure treatment as it is the drug, we’re never going to win this battle.”

At the end of the final panel, President Trump joined the conversation, reiterating the administration’s commitment to fighting the drug epidemic while focusing on treatment options.

Concerned Women for America will continue to be a part of this conversation. We are dedicated to joining with the administration in offering support and influencing policy as we come together as a nation to address the opioid epidemic.