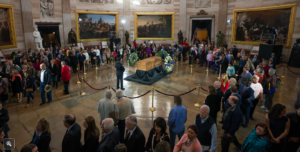 On Wednesday, The Reverend Billy Graham, America’s Pastor, was brought to the Capitol where he was laid in state. Hundreds of people waited in line to pay their respects to a man who touched countless lives. A handful of our CWA staff were able to make time to attend and shared their thoughts.

“I was struck by the beauty of the ornate Capitol juxtaposed to the simple casket which was lovingly hand-carved by prisoners from Angola maximum security prison in Mississippi. People around me quietly sung hymns around his casket, worshipping Jesus as they joined in the viewing of the rotunda. It was a beautiful experience. Even in his death Billy Graham preached redemption.”- Penny Nance, CEO and President

“I just left the U.S. Capitol where I had the honor of paying my respects to The Reverend Billy Graham. The simplicity of his plywood coffin with the cross on the top made by prisoners at Angola was so symbolic of the simplicity of the Gospel that he preached every day that he had the opportunity to do so. I cannot imagine those that greeted him when he entered Heaven’s gates who are there because of the words that he spoke. They heard the words and the truth of the words that he spoke, and they found their way to repentance and forgiveness and redemption. What more could be said about a person’s life than that. “Just as I am without one plea but that Thy blood was shed for me.” – Kenda Bartlett, Executive Director

“As I stood in line towards the end of the day waiting to pay respects to The Rev. Billy Graham, I was struck by the legacy of unity and love that this man left behind. Hundreds of people gathered in this polarized city to honor his life – a life of service, humility, and love for Christ and His people. As I stood in the Capitol viewing his casket and surrounded by strangers, I prayed that his legacy will continue to impact lives. His life captivated people and in his passing, so many stories have been shared on so many platforms. I pray that these stories highlight Christ and that even more people will come to know Jesus through Billy Graham’s death. For him, that would be the greatest honor. I wish I could have seen heaven on that morning when he came into glory – what a celebration!” – Annabelle Rutledge, Communications Coordinator

“Getting to pay my respects to The Rev. Graham at the Capitol was a moving experience. It was humbling to see the lines of people willing to wait hours for their turn to publicly honor a man only famous for preaching the Gospel of Jesus Christ. He is only one of four private citizens to be honored in this way, and he is being honored because of his love and dedication to the one true God! That is incredibly encouraging to me.” – Janae Stracke, National Field Director