CNBC Undercard Debate: Foreign Policy, the Economy and the Family 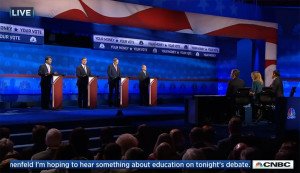 Sen. Graham started with an emphatic criticism of Secretary Clinton’s comments that the VA problems were overblown:

SEN. GRAHAM: Here is my take on things. Without national security, there is no economic security. Without the sacrifice of the veterans, all of our hopes and dreams are at risk. Just a few days ago, Hillary Clinton said that the problems with the VA are being exaggerated by Republicans. They are not. They are real …

And he kept his focus on foreign policy all night long:

SEN. GRAHAM: Here’s the problem. We’re being walked all over because our Commander-in-Chief is weak in the eyes of our enemies. Do you think Putin would be in the Ukraine today if Ronald Reagan were president? Why are the Chinese stealing our intellectual property, hacking into our system? Why are they building islands over resource-rich waters? Because they can get away with it.

At the end of the day, ladies and gentlemen, the foreign policy of Barack Obama needs to be replaced, and the last person you want to find to replace his foreign policy is his Secretary of State.

Gov. Pataki also hammered the Secretary for the e-mail server controversy.  He said:

GOV. PATAKI: I’ve gotta tell you something, talking about cybersecurity. Hillary Clinton put a server, an unsecure server, in her home as Secretary of State. We have no doubt that that was hacked, and that state secrets are out there to the Iranians, the Russians, the Chinese and others.

That alone should disqualify her from being president of the United States.

Gov. Jindal stayed on point all night calling for significant cuts on spending.

GOV. JINDAL: Whenever they tell us in D.C. they’re going to cut tomorrow, that means they’re never going to cut. Tomorrow never seems to happen …

Let’s be honest, $18 trillion of debt, record low participation rate in the workforce. Record number of Americans on food stamps. We are going the way of Europe. The left is trying to turn the American dream into the European nightmare …

We’ve got a choice. You grow the government economy or the American economy.

He also took on the entitlement culture, noticing that it promotes government’s encroachment on individual liberties, including religious freedom:

Sen. Rick Santorum made the family the center of his economic policy:

SEN. SANTORUM: We have a system that has a low single rate, but we take care of American families. I’m talking about $2,750 per person. That means a family four, that’s $11,000 dollar tax credit. That’s a very, very strong pro-family — and if you looked at the Wall Street Journal today and so many of the publications that have been out there, they’ve talked about how the biggest problem the middle of this country for workers to be able to rise and actually the breakdown of the American family.

William Galston, a liberal, said that on the page of the Wall Street Journal today. That the key to poverty is families. We put forth a pro-growth Steve Forbes plan, combined it with a pro-family plan, and that’s why I think it’s going to work and work effectively …

The word “economy” comes from the Greek “euthokis” (ph) which means family. The family is the first economy. And the one thing that we do not talk about enough is how stable families are vitally important for the middle of America to be prosperous and to grow and be safe. And I will have policies, not just tax policies, but others that will make sure that families are strong again in America.