Anita Hill is not Hollywood’s answer. Her ‘they all do it’ defense of Clinton doesn’t fly. 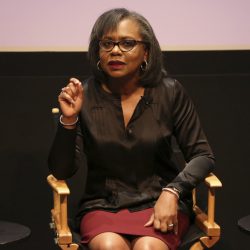 Aspiring actresses and Hollywood career women may have cheered when they heard Show Biz execs tapped Anita Hill to lead a sexual harassment commission examining issues of sexual misconduct and inequality in the entertainment industry.  As a former victim of an actual physical attack and attempted rape over 20 years ago, all I can say is, “I wish this was truly a win for women.”

Besides the obvious problem of Hollywood big wigs choosing to politicize this problem, the deeper issue is that Ms. Hill is not the advocate for whom women are looking, especially in an industry that is led by many clearly hypocritical men.  The women of Hollywood may have grown up learning about Anita Hill as a heroine, but as we’ve come – all too painfully – to learn, academia and media have painted a picture of her over the past quarter century that is conveniently divorced from reality.

Ms. Hill had the chance to stand up for numerous women who were being sexually mistreated by a powerful man. Instead she chose to defend that man and cast doubt on his accusers.  So much for every woman deserving to be believed.

During President Bill Clinton’s sexual misconduct scandals, Ms. Hill was interviewed by Tim Russert and Gwen Ifill of NBC News on Meet the Press.  They asked her directly about accusations made by Kathleen Willey, Paula Jones, and others. Her reaction would cause a great deal of shock today, and the women of entertainment need to know what she said then, because it affects how much confidence they should invest in her now.

Kathleen Willey, once an enthusiastic fundraiser for, and supporter of, Bill Clinton’s successful presidential campaigns, came to see him in the Oval Office. She was in financial trouble.  He chose this moment to assault her.  When asked about Willey’s accusations on Meet the Press, Ms. Hill dismissed them.

“We don’t have Ms. Willey claiming that this behavior was severe and ongoing, or pervasive enough that it became a condition of her employment. She’s not making that claim at all. And, in fact, no one has made that claim. She says in the deposition, I believe, that she was not given any particular favor at the White House because of this incident nor could she say that she suffered any disadvantage because of this incident.”

Russert pushed: “So, do we dismiss the president’s alleged behavior … because he backed off when he was told ‘no?’ It’s acceptable.”

She then inexplicably launched into the “they all do it” defense, citing Presidents Kennedy and Johnson among others.

“I think the American public has heard so much about the sexual activities and the sex lives of these individuals, and we’ve sort of become cynical and said, ‘Well, if he did it, maybe that’s OK; they all do it.”

If you’re a woman in the entertainment industry – or any victim of sexual misconduct or physical assault – and you’re watching this or reading the transcript, it does not inspire confidence.  Quite the opposite, especially in light of the revelations about Harvey Weinstein and others.

Hill kept going and even more inexplicably compounded the “they all do it” defense with the now unfathomable double-standard reasoning that President Clinton should get a pass because … he’s a liberal and supports so-called “women’s issues.”  Sound familiar?

This is utterly ridiculous given today’s revelations. Before he was outed as a predator, Harvey Weinstein took a back seat to no one as a liberal advocate on what Hill referred to as “women’s issues generally.”

When Ms. Hill had the opportunity to step up and defend the powerless against the most powerful man in the world, her instinct was to defend him, because his politics happened to be liberal. Well, it’ll come as no shock to every woman in Hollywood that their town is replete with countless powerful men whose politics just happen to be liberal.

It doesn’t take a great intellectual leap to posit this is why, in all their insecurity (and condescension), the Hollywood moguls picked her to lead the commission in the first place.  If these leaders truly care about the women in their industry, they’ll find someone way better to lead this effort than Anita Hill.  As it stands, with Anita Hill at the helm, this effort must be viewed as unserious.

Editor’s Note: A version of this article was published by USA Today. Click here to read it.