ABC Committed to Pushing “Family-Friendly” Sex, Pornography, and Swearing Into Your Living Room 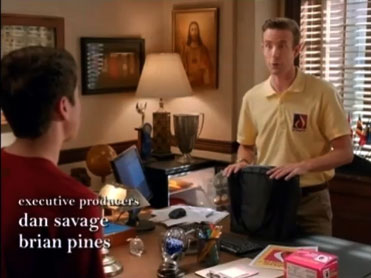 Despite low ratings and poor reviews, ABC’s The Real O’Neals is back for a second season of explicit content. Why? It’s certainly not because the show brings in network revenue.

The Real O’Neals, penned by “America’s most in-your-face sex columnist and gay rights activist” Dan Savage, depicts an Irish Catholic family on the brink of divorce managing an anorexic son, a gay son, and a daughter who may be involved in criminal activity.

According to the report, during a March 2 episode, Kenny O’Neal’s high school girlfriend Mimi tells him she wants to have sex and hands him a box of condoms. During another episode, she encourages him to touch her chest.

Parents Television Council President Tim Winter had this to say:

“ABC has essentially inserted explicit and adult-themed humor into a PG-rated, prime-time program that is about a family, created for families, and aired at a time when children are likely to be watching.” “Even worse,” he went on, “much of the sexual and expletive-laced dialogue is delivered by characters who are children. Simply put, the network is defrauding parents by rating this show as appropriate for young children.”

Winter isn’t alone in his disapproval of the program.

The New York Post also criticized The Real O’Neals calling it “a witless collection of offensive anti-Catholic clichés” and the New York Times described it as “the guest who arrives late to the party, blundering in loudly and clumsily,” and that “anyone who values subtlety and sophistication in their humor is eligible to be dismayed.”

Despite these criticisms, ABC renewed The Real O’Neals and instead cancelled programs like The Muppets, which boasted more viewership and a higher rating overall.

Why then would ABC keep The Real O’Neals and forfeit a program like The Muppets with a larger audience that is more likely to attract network revenue?

“Renewals for The Real O’Neals and The Catch also appear more political than rational, as neither pulled much of an audience this season,” The Hollywood Reporter wrote.

All this suggests what most of us know intuitively: Television is not just about making money; it is also about pushing an ideology. It is about marketing a narrative – a liberal narrative where conservative, Christian values are demeaned, while dangerous, libertine, irresponsible behavior is lauded and normalized.  There is also a political aspect to it as well.

And yet, all of that cannot overcome the truth.  The many casualties of pre-marital sex, pornography, and even swearing are plainly seen by all, and the pain of so many men, women and children falling victims to these destructive behaviors cry out for reform and (ironically) reality on television.

If you’d like to contact ABC and express your dissatisfaction with these sleazy and poorly done shows, you can call them at 1 (800) 230-0229 or send your feedback by using this link.

“Turn away my eyes from looking at worthless things,
And revive me in Your way.” Psalm 119:37, NKJV

—
Kristiana Mork is part of CWA’s 2016 Ronald Reagan Memorial Internship class where she serves for the Legislative Department.