A Primary View from Iowa 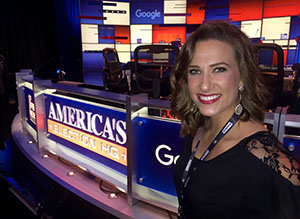 As an Iowa native, presidential elections are nothing new to me. Growing up, it meant nothing but political mailers, commercials, and phone calls for about 18 months. My parents would have my siblings and I answer the phone to screen calls for them or they would never have been productive. It wasn’t unusual to get 15+ political phone calls in one day. My parents, like many other Iowans, weren’t annoyed by the commercials and weren’t screening their phone calls because they didn’t care about the election or America, but simply because they didn’t have time to worry about it until the vote actually rolled around.

This is why I believe this last debate in Des Moines, Iowa, was especially important. The caucuses are tonight, and Thursday was an opportunity for Iowans to tune in and hear what D.C. has been listening to for months.

I have watched every debate and had the privilege of attending Thursday’s debate with my parents in Des Moines. After spending the weekend in Iowa and discussing the candidates with multiple people, I’m getting the same consensus from many of them. We like our options, but we can’t decide.

Unlike any other election I can remember, we have a field with multiple candidates who profess faith in Jesus Christ.

For evangelicals in particular, this makes voting both encouraging and difficult. It’s encouraging that so many men of God are pursuing leadership for our country, but difficult because we can only pick one nominee and we do not want to split the vote. For many, it’s easy to say who we do NOT want as our nominee, but much more difficult to say who we DO want.

I cannot tell you who to vote for, but I can tell you how I am approaching tonight’s Iowa caucus.

Although there are several candidates I would support, it has come down to two for me. So as I enter tonight’s caucus I will be praying for wisdom and discernment for myself, those around me, and all caucus-goers across Iowa. Because of where our country currently is and the options we have for our future, I don’t think we have anything to lose unless we divide ourselves and split the vote. It is important for conservative voters to rally behind a single candidate and be confident in our choice. I believe in a sovereign God, and I believe in the power of prayer. So tonight, let’s not only practice our right to vote, but our right to pray. Prayer and voting are both vital aspects of this election; without one or the other, we are sure to lose what we hold dear.