The fast-paced 2016 state legislative session came to a close at midnight on March 24. The 40-day session opened on January 11, and State Director Tanya Ditty represented your interests as a volunteer lobbyist at the State Capitol throughout the entire legislative session.

Concerned Women for America’s seven core issues are: Sanctity of Life, Defense of Family, Education, Religious Liberty, National Sovereignty, Sexual Exploitation, and Support for Israel. Legislation this session encompassed several of these core issues. On-the-ground lobbying efforts combined with grassroots prayer and action gets results! Without calls and e-mails from CWA members and friends, successes would have been more difficult to achieve.

After a three-year battle to pass a religious freedom bill in Georgia, a compromise was reached between the House and Senate, and HB 757, the Free Exercise Protection Act was passed. Less than two weeks later, Gov. Nathan Deal caved and vetoed the bill. Was HB 757 perfect?  No.  Was the compromise bill worth supporting? Yes. Georgians saw nothing unreasonable in this legislation, yet Gov. Deal chose to turn his back on people of faith. Read CWA of Georgia press release.

In a poll taken by national pollster Clout Research after the passage of HB 757, this question was posed:  Should Gov. Nathan Deal sign the [religious freedom] legislation?  Sixty-six percent agreed that Gov. Deal should sign the legislation. There was majority support for the bill across political parties, in all fourteen congressional districts and across all demographic groups.  The poll also showed that 80 percent said the tide of political correctness has run amuck in this state, endangering our fundamental right to freedom of conscience – the right to think and believe what we want without fear of punishment.

At a press conference following the veto announcement, CWA of Georgia State Director Tanya Ditty made this statement, “Clearly Gov. Deal is out of touch with the people of our state. This is why people are angry with the politicians in our nation. They are elected to represent the will of the people – not Hollywood values, not Wall Street values. They are elected to represent the voters of Georgia, and that does not preclude the people of faith.”

Sadly, Gov. Deal sold our religious freedom protections for thirty pieces of silver. Instead of signing a bill that provided broad-based religious freedom protections for all Georgians, Deal buckled to the pressure of the LBGT community, the film industry, the NFL, Atlanta’s hometown teams the Falcons, Braves and Hawks, and large corporate interests, such as the Georgia Chamber of Commerce, Home Depot, Delta, Coca Cola, SunTrust, UPS, Disney, and Salesforce.

Lt. Gov. Casey Cagle and Speaker David Ralston have vowed to work on religious freedom legislation next year. There is a strong appetite for religious liberty in this state, and CWA of Georgia will continue to work tirelessly until a broad-based religious protections bill is passed and signed by the governor. 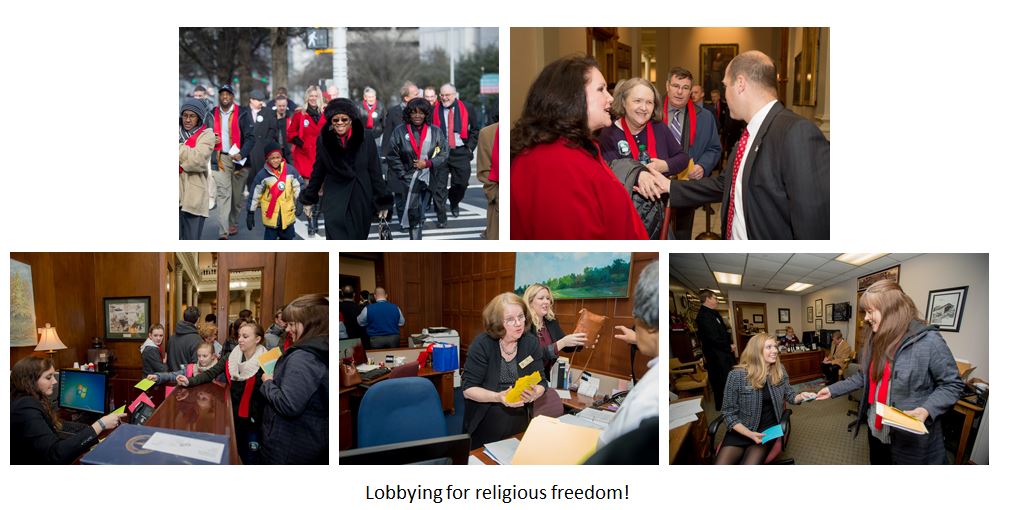 “Georgia Civil Rights in Public Accommodations Act”
Introduced by Rep. Rich Golick (R-Smyrna), HB 849 would have placed in state code the federal code that prohibits public accommodations discrimination. Taken at face value, this bill posed no dangers to Georgians. However, CWA of Georgia opposed HB 849 for several reasons. First, HB 849 was not necessary – public accommodation protections are already codified in 42 U.S.C. Section 2000a.

Third, HB 849 was amended in committee to include “sex.” Here was the danger in the amendment: the Obama administration has deemed “sex” an elastic term, and regards “gender” (how one feels) synonymous with “sex” (biology), and is aggressively embedding “gender” as a part of federal policy, including Title IX funding.  As recent as December 2015, a Chicago suburb high school must now allow a transgendered male to female student full access to female restrooms and locker rooms or risk losing Title IX funding.  Passing the bill could have had grave consequences for our public school students.

Lastly, CWA of Georgia opposes any real or potential Sexual Orientation Gender Identity nondiscrimination legislation, i.e., “bathroom bills”, which would allow transgendered men and women to utilize the bathrooms, showers and locker rooms of their choice.

Stopping HB 849 was a victory for the privacy and safety of women and children.

The efforts to expand predatory gambling via casinos and pari-mutuel wagering on horse racing were stopped for this year! The following bills were passed out of their respective committees but were not voted on by either the House or Senate.

Stopping the gambling bills was a major victory, because any form of gambling is destructive and causes irreversible harm on individuals and families.

Introduced by Rep. Allen Peake (R-Macon), HB 722 sought to permit in-state cultivation of marijuana for the purpose of extracting cannabis oil for medicinal purposes. The bill would have also expanded the medical conditions eligible for medical marijuana (cannabis oil). HB 722 passed the House but died in the Senate.

CWA of Georgia opposed HB 722 because it would have brought Georgia one step closer to the outright legalization of recreational marijuana.

Education
Textbook transparency
Introduced by Rep. Kevin Tanner (R-Dawsonville), HB 739  provides for an open and transparent approval process for state and local instructional materials and content. The bill also requires school districts to post online the textbooks that are currently be used in their schools. HB 739 passed the legislature and is awaiting the governor’s signature. CWA of Georgia supported this bill.

Digital Learning Platform transparency bill
Sponsored by Sen. William Ligon (R-Brunswick), SB 281 would require schools to notify parents prior to using any digital learning platform. The bill was tabled in the Senate Education and Youth Committee. CWA of Georgia supported this bill.

You can review all the bills that CWA of Georgia tracked this year by clicking here.

Encourage-A-Legislator Prayer Project
This was CWA of Georgia’s thirteenth year to pray for and send note cards of encouragement to state legislators. Scripture commands us in I Timothy 2:2 to pray for “kings and all those in authority, that we may live peaceful and quiet lives in all godliness and holiness,” and over 60 volunteers did just that!  These volunteers prayed and encouraged 100 state legislators during the 40-day session.

So what lies ahead in 2016?
One doesn’t need to look far to see that powerful forces are at work to destroy not only our state and nation, but our culture, our families and our way of life. But even in these unsettling times, God had promised restoration to that nation whose people will humble themselves and pray.

In the midst of attacks on our faith, it is easy for people of faith to retreat and to simply close their hearts and minds to the madness happening all around them.

But we can do the opposite! Instead of retreating and closing off the world, CWA of Georgia is boldly moving forward in strength and confidence, seeking God’s face and calling on Him to reset our state…as we work to restore our foundational stones. CWA CEO and President Penny Nance said this, “During this time in our country’s history – with the cultural battle raging around us – it’s never been more important that the voice of conservative women be heard – loud and clear.”

Get involved with CWA of Georgia
Psalm 11:3 says “When the foundations are being destroyed what can the righteous do?” If you are interested in becoming a leader who thinks big and would like to be where the action is, we have a place for you!  Click here for exciting CWA opportunities.