By CWALAC StaffJuly 20, 2018Blog, News and Events, Support for Israel

Our morning began in the historic Jewish Quarter of Jerusalem. It encapsulates exactly what you picture Jerusalem to be. Compared to the other quarters in the Old City, it is calm and quiet while simultaneously bustling and full of life. 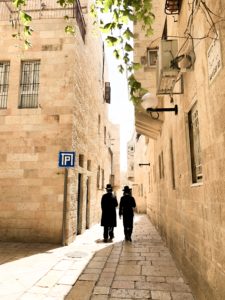 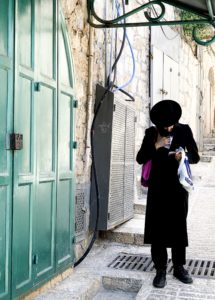 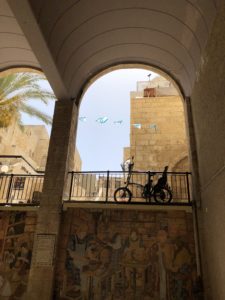 We walked through the City of David, parts of which are still being excavated, and trekked through Hezekiah’s tunnel. Hezekiah’s tunnel was carved during the reign of Hezekiah to allow water to go from one side of the city to the other. It is considered one of the greatest works of water engineering in the pre-classical period.

The water from Hezekiah’s tunnel fed into the Siloam pool where Jesus healed the blind man. We did a little interpretive Bible story reading with Dr. Allen Quine, Vice President of International Relations at Museum of the Bible, before heading back to the hotel to hear from our speakers for the night, David Nekrutman and Steven Khouri. 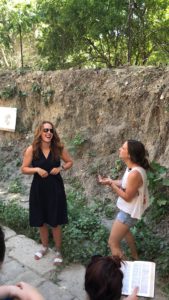 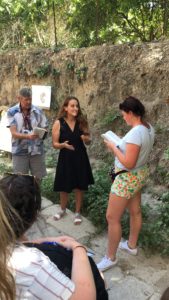 “Traveling to, and through, The City of David as well as the Jewish Quarter was yet another piece of the Bible coming to life. The Jewish Quarter is unlike any other quarter in Israel. It is pristine, full of beautiful shops and, of course, lots of history. Later we traveled to the City of David. Overlooking the City of David and knowing where David resided and the things he did makes the Bible come to life. You truly realize David was no different than any other man; his heart was full of sin just as is ours. God does not call the perfect to lead, He instead perfects the called and that is such a beautiful thing to be remembered.  From the lookout before entering the tunnels, you see this beautiful view of limestone buildings and land that goes as far as the eye can see; you see the beauty that is Israel. From there we traveled through the tunnels known as “Hezekiah’s Tunnels”; it is as if you are traveling back in time walking through these tunnels carved so long ago. These experiences added a new perspective to my life for which I am forever grateful.” Alixanne Kramer, YWA President, Tucson, Arizona Chapter

There weren’t many pictures from day eight as we spent it at two museums and ended with another speaker.

We were given the opportunity to go to Yad Vashem, Israel’s Holocaust Museum which is recognized as the most impactful holocaust museum in the world. It was an incredibly sobering experience. 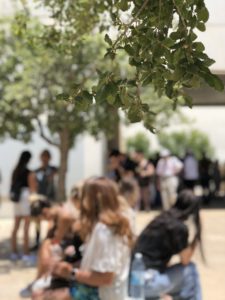 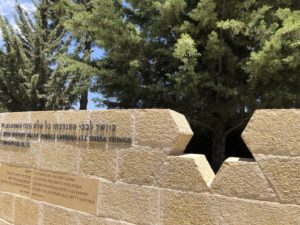 “As a self-proclaimed history buff, I thought I had learned all there was to know about the Holocaust. And yes, I did know most of the statistics, facts, and numbers, but it wasn’t until visiting Yad Vashem that I learned what the Holocaust truly means to the people whom it affected. Instead of numbers, I saw brothers, sisters, friends, mommies and daddies. I heard their beautiful stories of survival and sorrow. I felt a tiny fraction of the hole this tragedy left in a people already so scarred, but I also felt the hope and resilience of that same people. After each exhibit, the design of the building allows you to see the sunshine coming through the floor-to-ceiling window at the end of the hall. After each horror, you are able to see the light waiting for you, just as the Jewish people always do. Yad Vashem is not just a museum or a memorial. It is the embodiment of a people whose hope comes from the Lord and can, therefore, never be taken from them.” Ashley Henson, YWA Chapter President, University of Alabama

After Yad Vashem, we headed to the Israel Museum, Israel’s National Museum where portions of the Dead Sea Scrolls are on display.

Our day ended with a speaker, Rami Nazzal, who is a Palestinian journalist. Learning and understanding differing perspectives was a key component of our trip. Israel is a diverse nation with diverse opinions, religions, and cultures. To go to Israel and only hear one point of view would not be an accurate portrayal of the only democracy in that part of the world. Because of that, we were so thankful to have the opportunity to hear the Palestinian perspective.

“One of the highlights of our trip was getting to explore the complications of the Israel-Palestine conflict. Each night, we heard from a diverse set of speakers who further expanded our understanding. A particular speaker who stood out to me was Rami Nazzal. Rami is a Palestinian journalist who speaks to the experiences of Palestinian people in the land. When it comes to developing a political stance on any issue, I think it is crucial to fully explore both perspectives, as we know it is people’s personal narratives that have shaped their perspective of the world. Rami shared with us “the other side” of the conflict, particularly through narratives of Palestinians living under the Palestinian Authority and Hamas’ control. On the forefront of his lecture was the failing economy of the West Bank and Gaza. Similar to what I had learned in prior Terrorism classes in school, Rami believed that the failing economy was a main contributing factor to the radicalization of terrorists. This point of his lecture raised various questions about proposed solutions; particularly, is it the responsibility of Israel to intervene? Has Israel done too much already? A particular point of Rami’s argument that stood out to me was when a student asked him about his view of the BDS movement. Coming from a campus where the student government passed BDS, I was familiar with the issue, but surprised at what Rami had to say regarding it.  He said that while BDS might seem like a good idea to people who support Palestine, in reality, it hurts Palestinians more than helps. He gave the example of a Palestinian manufacturing employee working for an Israeli company; at the end of the day, divestment would be hurting the Palestinian man working on the manufacturing line before it would hurt the CEO. I am grateful to have heard from Rami and even more grateful that Israel’s commitment to democracy allowed for this type of dialogue to occur in the Middle East. The conflict is complex, even more so than I initially thought; however it is these types of discussion that need to occur so we can see peace in the land!” Alba Ibraj, YWA Chapter President, University of Michigan