By Yesica GoblirschJuly 26, 2019Blog, News and Events, Support for Israel 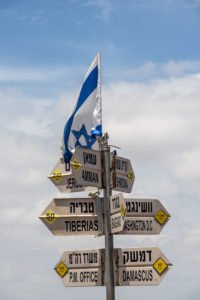 President Trump recognized “Israeli sovereignty over the Golan Heights”[1] on March 25, 2019. Not only did Israeli Prime Minister Benjamin Netanyahu see the United States’ recognition as a tremendous victory, he also unveiled a small settlement in the Golan Heights named “Trump Heights,”2 after President Donald J. Trump only a few months later on June 16. In both instances, dissenters claimed that Israelis have no right to the territory.

The Golan Heights is considered to be “occupied Syrian land”[2] as international law states that territory cannot be taken by force nor should territory taken by force be recognized as legitimate by other states.[3] However, Israel acquired the Golan Heights in self-defense during the Six-Day War as a response to Syrian forces “firing regularly and accurately upon Israeli settlements throughout April and May of 1967.”[4] Today, Israel continues to maintain control of the Golan Heights as a strategic buffer zone on the Syrian border.

Since Israel declared its independence on May 14, 1948, much of the Arab world has refused to acknowledge the sovereignty of Israel, the only Jewish state in the world. In 1948, Egypt, Jordan, Iraq, Syria and Lebanon united to attack the newly formed state in a war known as the Arab-Israeli Conflict. Israel, despite its infancy as a state, was able to successfully repel these attacks. Emerging from this conflict victorious, Israel gained control of “about 78% of the Mandate area”[5], that is of the portion of Palestine allotted to Israelis and Palestinians by the British Mandate for Palestine.

Critics of Israel claim that following 1948, Israel called for its borders to reflect the territory they gained upon achieving victory in the Arab-Israeli War of 1948.[6] The significance of this is that this would allow Israel to maintain more territory than was originally allotted to them in the United Nations Partition Plan of 1947. Nonetheless, Israel was willing to take necessary measures to pursue peace by giving back to their aggressors the land they won in the war of self-defense.

Then again in 1967, Egyptian President Gamal Abdel Nasser spoke about the strength and unity of Arab armies, positioned on Israeli borders, with the explicit intention of destroying the Jewish state.[7] Because of this grave threat, Israel made the difficult decision to tactically strike and destroy the Egyptian and Syrian air forces and begin a ground offensive on multiple fronts, capturing “the Sinai Peninsula, Gaza Strip, West Bank, Old City of Jerusalem, and the Golan Heights.”[8]

Despite the preemptive attack, Israel was not the aggressor in the Six-Day War. Israel was encroached upon by armies of the Arab World, and its decision was indeed one of self-defense as it sought to and succeeded in silencing “the artillery that had been firing with impunity on the settlements below.”[9]

Today, Israel continues to occupy the Golan Heights. The Golan Heights provides a high ground barrier and means of protection for northern Israel against potential shelling and attacks from Syrian forces. Critics argue that underlying Israel’s expressed need for security is its “deeper desire to control the natural resources of the territory Israel occupies.”[10]  The resources referred to include Lake Tiberias and the larger part of the Jordan River, which were allotted to Palestine as laid out in the Anglo-French Agreement of 1923. However, “two of the three main rivers that feed the Jordan River”[11] lie in the Golan Heights.

Still, this accusation of ulterior motives is a political misdirection to detract from the primary reason for acquisition of the territory. Apart from these sources of water lie other options for Israel having sufficient water for its population and sustainability. These include the purchasing of fresh water from Turkey and “the building of desalination plants.”[12]

There is indeed a benefit from the natural resources of the Golan Heights, but maintaining control of natural resources is not the primary motivator, as Israel had been willing to part with the Golan Heights in exchange for peace. This offer came on June 19, 1967, when Israel offered Egypt the newly acquired Sinai Peninsula and Syria the Golan Heights in exchange for peace. Neither state accepted this offer as both were a part of the Khartoum Conference in 1967, at which the Arab League “pledged there would be no peace, no negotiations and no recognition of the Jewish state.”[13] Peace with Israel was not an option despite Israel winning a war of self-defense and being willing to part with the land it acquired from the aggressors.

Following the Yom Kippur War in October of 1973, Egyptian President Anwar Sadat and Israeli Prime Minister Menachem Begin agreed to a peace treaty where Israel would return the Sinai Peninsula to Egypt in exchange for peace. Many years later, Israel chose to disengage from Gaza where the final “Israeli soldier left Gaza”[14] on September 12, 2005. Israel had hoped that disengagement from Gaza would create a path towards peace with Palestine. As many viewed Israel’s presence in Gaza as occupation, disengaging from Gaza put an end to the nearly four-decade-long Israeli Occupation in Gaza. Israel has showed a willingness to work with its neighbors in the pursuit of peace in the region.

So why has this yet to happen for Syrians and the Golan Heights? Syria and Israel have not been able to find common ground in terms of what the proper boundaries should be. Syria insists on returning to the boundaries it held prior to the Six-Day War in 1967. Israel believes they won a war of self-defense and desires to at least adhere to the “pre-1948 borders.”[15] The real question is why Israel would decide to return the Golan Heights to Syria when Syria refused to agree to peace with Israel and previously used the Golan Heights to shell Israelis living in Northern Israel? It would not.

While Israel acquired the Golan Heights as an act of self-defense and still needs it as a continued border of self-defense, peace will require compromise on both sides of the aisle. Syria must realize it may not be plausible for them to receive every inch of territory they lost in the Six-Day War. Not only did Syria seek the annihilation of the Jewish state, they also denied Israel’s offer to return the Golan Heights in exchange for peace following the Six-Day War. Because of this, the international community should recognize Israel’s acquisition of the Golan Heights as being necessary to Israel’s survival and indeed to their very existence.

Join with Concerned Women for America as we pray for Israel’s protection and stand with Israel in support of their national sovereignty and control of the Golan Heights. May God bless Israel.

Referring to quote from: Egyptian President Gamal Abdel Nasser on “May, 30, 1967 after signing a defense pact with Jordan’s King Hussein”

Yesica Goblirsch is part of the 2019 CWA  Summer Interns Class.