We Should Be United for Children Born Alive 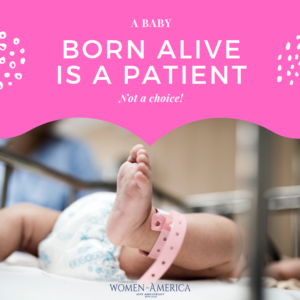 Imagine a mother aborts her baby only to discover several months later she is still pregnant. That was the story of Betty Smith. She was pregnant with twins, although no one knew it. “Before the abortion, we were both alive,” Sarah, the twin who went on to survive the abortion, has somberly written, “Moments later, I was alone.”

But she was intended to be aborted. Should she be? Let’s say she has now been delivered. Should a discussion be held between her mother and the doctor as to whether she should be helped to survive?

Believe it or not, this is the debate we are now having as a nation. According to many liberals, Sarah, now born and outside of her mother’s womb, is still a candidate for abortion. It all depends on the mother’s desires.

Planned Parenthood representative Alisa LaPolt Snow said as much in her testimony before a 2013 Florida Legislative Hearing. She testified unequivocally that the decision to help a baby born on a table as a result of a botched abortion should be left to “the patient and the health care provider.” When pressed on whether at that point the baby on the table is now itself a patient, she disturbingly chuckled and said, “That’s a really good question. I do not know how to answer that.”

Can anyone dispute that is infanticide? The issue is not abortion. There is no issue about “a woman’s body.” The baby is now outside the mother’s womb, alive.

The abortion-expanding law was introduced by Virginia Delegate Kathy Tran who admitted in committee her bill had no limits on abortion; it could be done up to the moment when the woman is already in labor, not just to preserve her life but even for her emotional health.

Virginia was following on the footsteps of New York who had just recently celebrated a similar law. Included in New York’s bill was a repeal of Section 4164 of the state’s public health law, which protected an infant born alive during an abortion. It is clear they are intentional in their desire to refuse care to children who are already born.

But, make no mistake about it, this is a liberal-elite-driven effort. The American people are disgusted and stand in overwhelming opposition to it. As a recent Associated Press news report put it, “Even most pro-choice Americans oppose late-term abortion, according to a newly released poll, putting them at odds with the Democratic push for state legislation removing barriers to third-trimester procedures.” According to the poll, “82 percent of all those surveyed disagreed with withholding medical care for a viable newborn, including 77 percent of pro-choice adults.”

This is encouraging. It is clear that the American people do not support these efforts to legalize infanticide. We must stand up and fight those in power who are looking out for special interests, instead of listening to their constituents.

A good vehicle to make our voices heard is now been presented in the U.S. Congress. On Monday, February 25, 2019, the Senate will have a roll call vote on the Born Alive Abortion Survivors Protection Act (S. 311). This simple piece of legislation would require that babies born alive as the result of a botched abortion be given “the same degree of professional skill, care, and diligence” as any other baby under similar conditions would be given.

Every senator, including our own, should be able to agree that every baby born alive deserves care. This is nothing extraordinary, but only the humane, decent, and right thing to do. It should pass unanimously.