By CWALAC StaffOctober 23, 2015Blog, News and Events, Sanctity of Life 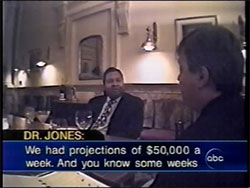 Chris Wallace, when still working for ABC, did a 20/20 investigative report which aired on March 9, 2000.  It covered the exact themes we now see in the Center for Medical Progress videos — namely profiting from fetal tissue sales obtained from abortion and altering those abortion procedures in order to obtain that tissue. In fact, clips and references from the news story have already been seen in the Center for Medical Progress videos.  The very first CMP video began with clips from that 20/20 report.  And in video 10, Deb VanDerhei explains that Planned Parenthood doesn’t want to repeat what happened 15 years ago, where an accusation of procedural changes caused a congressional hearing and legislation.

Wallace’s story, though dated in quality, has that eerie feeling of déjà vu, of history repeating itself.  It is even a little discouraging that the nation went through this before and is now facing the same issue — as yet unresolved.

Wallace says there were laws on the books against this before 2000 that weren’t being enforced, and his investigation led to further laws.  CMP has quoted those same laws in their videos, showing that, quite clearly, enforcement still remains elusive; criminal activity and ethical horrors clearly remain.  Though there was a Congressional Hearing on March 10, the day after the story aired, the bill introduced on March 15, 2000, (which is possibly the hearing and legislation that Deb VanDerhei was referring to in CMP Video 10) called the “Human Fetal Tissue Reporting and Disclosure Act,” which would have required detailed tissue donation reports to be filed with HHS, was never enacted.  Let pro-lifers seize this second chance to enact real change against this horrible industry.

Chaney Mullins is a special projects writer for Concerned Women for America.