Calling All Christians: Be A Doer, Not A Bystander

By CWALAC StaffOctober 23, 2015News and Events, Support for Israel 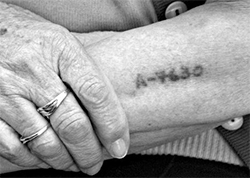 Antisemitism is on the rise, and Israel is in crisis. Christians need to ask themselves, “What are we going to do about it?” On a recent trip to Israel, I once again toured Yad Vashem, the Holocaust Museum in Jerusalem. I was struck by the lovely grove of trees outside the building, figuratively reliving the years between 1938 and 1942 alongside the museum’s visitors. These trees commemorate “The Righteous Among the Nations,” people who tried to protect Jews at great risk and for no personal gain. People like Dutch Christian Corrie Ten Boom are honored there. Contrast those honored in Israel with another group of people exhibited in the Holocaust Memorial Museum in Washington, D.C. The display reads:

The great majority of Europeans during the period of the Holocaust were neither killers nor victims. But whether or not they were involved in the ongoing genocide or understood the full extent of the “Final Solution,” most could observe small events forming part of the catastrophe as it unfolded in their own communities. … Some bystanders sought to exploit the situation of the Jews for personal gain, but most merely stood by, neither collaborating nor coming to the aid of the victims. This passivity amounted to acquiescence, and the planners and executors of the “Final Solution” counted on bystanders not intervening in the process of genocide.

Here is my nagging question: If I were alive during the Holocaust, who would I have been? Would I be the Christian who hid my Jewish neighbor in my home, risking a concentration camp for my own children, or the “bystander” who turned away, unwilling to help or even care? One can never know the answer in retrospect, but one can determine today’s actions.

According to the Antisemitism Worldwide 2014 Annual Report, published by Tel Aviv University’s Kantor Center for the Study of Contemporary European Jewry and the European Jewish Congress (EJC), antisemitism increased almost 40 percent from 2013 to 2014. In fact, 2014 was reported as one of the worst years in the last decade concerning anti-Semitic activity. In the U.S., 139 anti-Semitic incidents were recorded in July of 2014, a 157 percent increase from July of 2013.

Thus far, in 2015, Israel has lost 11 innocent lives and 66 have been injured in terrorist attacks. One of those victims is 78-year-old Haim Haviv, who died when two Palestinians shot and stabbed passengers on a bus. That same day, 60-year-old Rabbi Yeshayahu Krishevsky was killed when a Palestinian worker for the Israeli telephone company rammed into pedestrians at a bus stop and then hacked them with a cleaver. Another, a 13-year-old Israeli boy, not much younger than my own son, was attacked by two Palestinians while he was innocently out for a bike ride.

In light of the events unfolding in Israel today, and even here in the U.S., we have an opportunity to begin to answer that question of “Who would I have been?” Do we sit by passively as our neighbors or our ally is vilified, or do we respond in an active way? Have we, in fact, acquiesced, or have we found the boldness to speak out?

The recent escalation of violence and terrorism in Israel should be of grave concern to the world, but particularly to peace-loving Americans. Make no mistake; this is a pivotal moment in the US-Israel relationship. Israel is in crisis, and what we do next matters not just to her but also to our very souls. We can never go back and right the wrongs of history, but we can each determine in our hearts to do everything in our power today to be active rather than passive. We must resist passive behavior and not just acquiesce. Speak to your neighbors, friends, and family about the violence in Israel and contact the U.S. Department of State to tell Secretary of State John Kerry to support Israel. Let’s not be bystanders.

Editor’s Note: A version of this article was published by Breitbart. Click here to read it.