The Evolution of Ma’am

By CWALAC StaffMay 7, 2015Blog, Defense of Family, News and Events 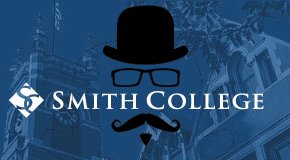 What do you call a man in a dress? “Freshman,” if you’re going to the all-women’s Smith College this fall. The college is changing its policy on transgendered women. (For the uninitiated, that’s men in skirts — never, ever to be confused with men in kilts. *cough, cough!*)

The Associated Press notes that the move rewrites Smith College’s historical rules, as it has “previously asked undergraduates to have consistently identified as female since birth.” But the times, they are a’changin’ — as are “concepts of female identity” which have “evolved,” according to Smith President Kathleen McCartney and board Chair Elizabeth Mugar Eveillard’s announcement.

And just like that, personal plumbing (i.e., anatomy) is tossed out the academic window.

In classic, Darwinian evolution, the fish physically progresses to the point where it can leave the water and dwell on land. In this new, progressively psychological evolution, how you feel trumps what you are; what you imagine yourself to be is now stronger than your physical reality.

But a fish who believes it can walk on land and foolishly tries to do so soon finds itself flopping around gasping for breath.

At the end of the day, a man who feels like a woman is still, physically, a man. And not all women have had their radical feminist lobotomies by college time. So what happens when a shy, young woman is forced — for the sake of evolved “concepts of female identity” — to share a room and/or a bathroom with a deep-voiced, fuzzy-faced “woman” formerly known as Bill? Should the shy, young woman be forced to “get over it”?

By progressive standards, “yes.” Her inability to see Bill as “Veronica” isn’t Bill’s — errrr, Veronica’s — fault at all … again, by progressive standards. But what if Bill/Veronica one day wakes up out of his political-correctness-induced stupor and decides he’s a man again? Will he get kicked out of Smith College? Could he be charged with sexual harassment for being in a girl’s dorm? Could he simply say, “Oops, I did it again,” change his mind, and tell Smith College that he’s still a woman? (And would Smith College, for the sake of evolving concepts, just brush it under the rug?)

Or what if Bill wakes up and feels like a zebra? What then? When we ignore the objective for the subjective, things go downhill pretty quick.

Speaking of downhill, why stop with gender? What about age? What if Bill wakes up and decides he’s not a woman after all? What if he decides he’s a 10-year-old girl and demands to go back to middle school? Now we’ve got a biologically male 20-year-old sharing bathroom and locker room space with … well … shy, young girls.

Sound over the top? It should, but it’s not. An increasingly large number of activists have been trying to break the age barrier for years – from man/boy-love advocates to folks who simply want to lower the age of sexual consent.

Twenty years ago, your average American would have thought that “gay marriage” was a crazy notion. But those of us in the pro-family movement were already aware of the activist push to redefine marriage, and we were working hard to stave it off. And we did for awhile. Now we’re waiting on the Supreme Court to decide for or against literally thousands upon thousands of years of marriage as it has always been.

In the meantime, the activists move forward, and the issue now is whether or not who you feel like matches up with who you are on the outside. And, frankly, that’s a tough issue. It’s frightening to feel like a woman in a man’s body or vice versa. I wouldn’t wish that struggle on anyone. But giving into those feelings and acting out isn’t going to make things better.

How you feel now is most likely not how you’ll feel in ten years. People change. It doesn’t matter how genuinely you feel like a bird. If you take a running leap off the Empire State Building, all the arm flapping in the world won’t keep you from plummeting straight to the ground.

Similarly, no matter how much Bill “feels like a woman,” he’ll never truly be one — even with surgery. Why? Because he’s a man. There are things he will never, ever rid himself of, and that’s going to be – and already is –  a huge issue.

The world should not have to fundamentally change to meet the whims of a small group of confused individuals, but that’s what the activists seek. “If only the world would get rid of its bigotry, transgendered people would feel accepted and not afraid.”

But in truth, it won’t be enough. It will never be enough. Even in a perfect, progressive world — where everybody says the king IS wearing clothes — Bill/Veronica will always wrongly interpret looks from people along his journey as disapproval. Why? Because subconsciously, deep down at his core, Bill will know that something is dreadfully wrong with him. And again, subconsciously, he’ll regret giving into and pursuing the idea that he’s Veronica. In short, he’ll never believe we accept him as a “her,” no matter what we do, because he won’t be fighting society; he’ll be fighting his own conscience.

And so, winning entry privileges into an all-women’s school is couched in terms of a victory, but it lends itself only to the reinforcement of a wrong decision. And with activist judges making it harder and harder these days for people to seek treatment and healing for things once classified as paraphilias, it doesn’t look like things will get better any time soon.

As pro-family organizations, we will do our best to hold back the tide of activism seeking to thrust these issues down the throat of America. As Christian Americans, we will look for those gasping fish on the shorelines and, through the power of the Gospel, help restore them to the waters from which they leaped.

We will do it all in love, remembering that God loves everyone and that He Who parted the Red Sea for one nation can turn the hearts of another nation back to Himself once again.