The CIA Cover Up of Jonathan Gruber 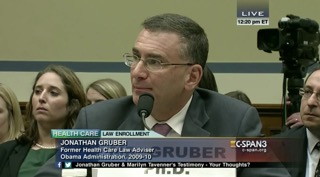 Did you hear the statements MIT economist and ObamaCare author Jonathan Gruber made yesterday to the House committee? Me neither. I was instead bombarded with the left’s promulgation of the report that the CIA “mislead the American people” during the Bush Administration. The Senate unveiled one of the strongest criticisms of the CIA in 40 years. Coincidence? I think not.

After speaking with a former diplomat last night, I became aware of the possible connection between the timing of the two events in the news yesterday. Why not come out with the CIA report Monday or even a year ago? Why Tuesday? Conveniently, Tuesday was the same date of Gruber’s comments before the House committee on Oversight and Government Reform.

What better way to distract the people from watching his statements than by bringing up an even more contentious news story? It seems that bringing up another case of “deception” was the best way to draw attention from the comments regarding the failure of ObamaCare and Mr. Gruber’s offensive remarks—which included him calling the American people “stupid.” The public was enraged by Mr. Gruber’s comments and rightly so.

The American people are becoming increasingly suspicious of the left’s maneuvering … which is ironic, because we’ve been called dumb by a member of the left. It’s hard to confirm this “distract the American people” accusation as fact — there is always a chance it was a coincidence; however, a large part of me agrees with my diplomat friend that the timing of yesterday’s reporting was not a mistake.

In case you missed it, here is a recap of what went on in the committee meeting yesterday. In his remarks, Gruber did apologize for his insulting comments but said that “[his] own inexcusable arrogance is not a flaw in the Affordable Care Act.” Rep. Darrell Issa (R-California) stated that it was clear that President Obama’s health care system was misleading and purposefully lacked transparency as administrators misrepresented enrollment numbers. The American people are now becoming aware of the fact that the famous ObamaCare tagline, “If you like it, you can keep it,” regarding citizen’s health care plans is just plain false.

In a statement after Gruber’s testimony, Congresswoman Cathy McMorris Rogers (R-Washington) said, “[the people] deserve to know how their hard-earned tax dollars were being paid to Mr. Gruber and other ObamaCare architects while they produced work that concealed the real impact of the health care law.”

Americans are not dumb; however, they do believe that they can trust their elected leaders — as they should. Right now the Obama Administration is not making that easy to do. Unfortunately, yesterday’s actions may have been another example of the left covering over their mistakes by drawing the eyes of America elsewhere.