By CWALAC StaffJanuary 2, 2014News and Events 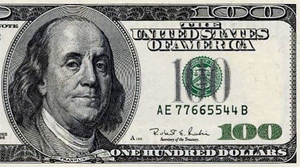 News of “Tips for Jesus” filled the airwaves as an anonymous tipper left thousands for unsuspecting waitresses — all in the name of Jesus — scratching “God Bless” and leaving only a blessing.

What would just one hundred extra dollars mean to you? For most of us, $100 is a lot of money. However, for some people it is an immense amount of wealth and can maybe even mean the difference between life and death.

At Christmas time, believers often want to give even more of our resources to care for the poor or to charities, including Concerned Women for America, and we are very grateful.  2 Corinthians 9:7 says “God loves a cheerful giver.”

In 2010, in addition to our regular support for our church, Concerned Women for America, and Prison Fellowship Ministries, my husband and I decided to respond to a challenge by a friend.  The plan was for us to each carry a crisp $100 bill and then to pray diligently for the Lord to show us to whom it was to be given.  That sounds simple, right? Seriously, when you look around you, especially in an urban area like Washington, D.C., where I live, you soon realize there are people in need everywhere.  But it wasn’t that easy.

My work required me to go to New York City for a Fox interview, and I remember thinking that might be the perfect place to help someone in need.  I walked through Penn Station waiting for my train and prayed for the homeless.  I looked at other commuters and the women who sold me coffee, but no.  In my heart, I truly felt like they were not the intended recipients of my special offering of love.  They needed my prayers, and oh how I wish I lived every day praying for God’s blessing on the people around me as I did during that season.  However, the answer always seemed to be a heavenly, “No.”

Other believers will understand that there is an internal dialogue that happens that to the outside world may sound crazy, but to those who know the Father’s inaudible urging, once you “hear” it there is no denying it.  I started to get annoyed.  Christmas was past and still I had this $100 in my pocket.  I had resisted the urge to spend it many times over the past couple of months.

Maybe God wasn’t listening, or maybe I didn’t hear him.  I confess that, as the weeks wore on, I didn’t quite think about it every day as I had in the beginning, but I still held out hope that God had someone I could help in a meaningful way that went beyond the money to being a light in darkness.

Then came February 4th.  I was on my way to work, crossing the 14th street bridge into D.C., like I do almost every weekday morning.  I often see people asking for money, but I have never felt compelled to give anything past maybe the Zone Bar I had in my purse for my lunch.

This morning was different.

There was a woman on the bridge who I barely noticed at first, but just as I passed her, our eyes locked and I knew! I can’t explain it, and the skeptics reading are going to think I’m crazy again, but I knew.

Now, for you non-believers, in the Evangelical tradition, we believe that the Holy Spirit is responsible for touching our hearts and consciences in this intimate way.  The Holy Spirit, in our theology, doesn’t produce the foaming-at-the-mouth, rolling-around-on-the-carpet reactions that some would have you believe, but instead, He’s a still, small, inaudible voice that convicts you when you blow it in a very painful way and urges you to do good.

Now, this urging toward good works isn’t going to earn our way to heaven.  Its purpose is to please our Savior, Whose sacrifice on the cross paid the penalty for our sin and brokenness.  Our good works are an offering of love.  My giving to the poor is, in essence, giving to God.  As Matthew 25:40 says, “When you did it to one of the least of these … you were doing it to me.”

We know that we can never measure up to God’s holiness, that’s why it’s called “grace.”  Jesus takes our sin and has already paid the price in full.   Our good works come as a gift to Him in gratitude for the price He paid in our place by dying on the cross.

So there it is.  I believed the Holy Spirit was urging me to give this woman my $100.  But how?

I was flying through rush hour traffic and had to figure out how to “obey God,” which in D.C., traffic is hard enough on a normal day.  My heart was beating out of my chest with the urgency of my quest.  I did a U-turn and found a place to park my car.

Then it hit me, “Now what do I do?”  My head took over what my heart was urging. I was thinking, “Now, she’s begging on a bridge, and you don’t want to reward her for that, so you better say something about begging not being ideal.”  It hit me hard: “DON’T SAY THAT!!” was the response I felt — almost like I had been slapped in the back of the head.  “Don’t you dare say that.”  Okay, then what?  What am I to say?  Then I knew.  “Tell her, ‘God sees her.’”  What?  What does that mean?  I’m thinking, “Okay God, I hope you know what you’re doing.”

I hopped out of my car, ran in the rain across the street, and motioned for her to cross to me.  I was afraid to leave my car parked so illegally.  She must have thought I was insane, but she came.  And I said it.  I handed her the money, and I said, “God told me to give this to you.”  I took her face in both of my hands, looked her in the eyes with tears in mine and said, “God sees you! He sees you and He loves you!”  And in that place, in the rain, a woman in dirty clothes and a sad face broke down, began weeping hysterically, and threw her arms around me.  She gave the hardest, sweetest hug I have had in years.  We both cried a moment — her loudly, me quietly — and then we parted.  I have never seen her again since.

The afternoon of that same day went down in D.C. history as one of the largest snowstorms ever.  It was nicknamed “Snowmagedden.”  No one, certainly not me, knew it was coming.  We received 20 inches of snow in a matter of hours, and traffic was snarled for almost 24 hours.  It took me 12 hours to get back home that night, instead of my normal hour, and all I could think about besides, “I hope I don’t wreck,” was about the woman on the bridge.  Maybe she and her family were sleeping someplace warm instead of under a bridge.  Maybe she wasted it on booze or drugs.  I’ll never know.  But I know I saw a miracle happen in me.  I saw God answer my prayer and maybe save a life or, at the very least, shed some light in a dark world.

So here comes Christmas again.  I challenge you to join me this year in your own $100 challenge.  Skimp on the coffee or a big meal or something else you want, and save a crisp bill for someone God chooses.  This part is a must: pray, pray, pray for the people around you, and expect a miracle.  But most of all, be anonymous, and give God the glory.  The miracle will be in your own heart as much as in someone else’s life.  I want to hear your story.  E-mail me how you took part in the $100 challenge at [email protected].

Editor’s Note: A version of this article was published at FoxNews.com. Click here to read it.