Tennesseans Stood Up for Amendment 1! 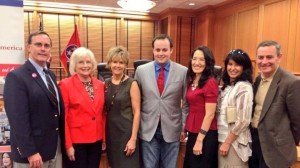 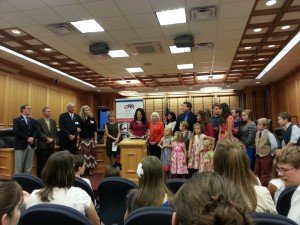 Concerned Women for America of Tennessee is pleased to announce the resounding success of the “Tennesseans Stand Up for Amendment 1” Press Conference. An overflowing crowd of Amendment 1 supporters gathered to listen to experienced and informed speakers talk about why we should vote ”Yes” on Amendment 1. The Duggar family sang a beautiful rendition of “It’s Through the Blood.” Josh Duggar, now with Family Research Council, released some very encouraging poll numbers which show that 64 percent of Tennesseans support Amendment 1 and that when they have the correct information about it, they will vote for it.

Sen. Mae Beavers, who carried one of the important bills to get Amendment 1 on the ballot, spoke about her determination to get this bill passed. She also gave thanks and spoke of her appreciation for one of our attendees, former Sen. David Fowler with Family Action Council -Tennessee. She acknowledged that he had drafted the first versions of this amendment and has continued to support it, jumping through all the hoops needed to get it on the ballot.

State Representatives Courtney Rogers and Terri Lynn Weaver also spoke about the importance of the people of Tennessee supporting and voting Yes on Amendment 1.

Brenda Causey, State Director of Concerned Women for America of Tennessee, spoke of three reasons Tennesseans should vote for Amendment

Hearts were touched by the poignant words Michelle Duggar shared with us, speaking about the baby holocaust being perpetrated by abortion providers across the state. She also made a startling point that because abortion facilities are not regulated or licensed, your dog may get better care from a veterinarian than a woman seeking an abortion at one of these abortion facilities.

Two important figures in the Pro-Life movement, who were not able to make it in person, sent statements in support of Amendment 1. They were Congresswoman Diane Black and Sen. Rick Santorum. Read their statements here:

Congressman Diane Black – “I am proud to support passage of Amendment 1,” said Congressman Diane Black. “I was privileged to carry the underlying legislation in both the State House and the State Senate, and after more than a decade of work, Tennesseans now have a chance to voice their opinion at the ballot box. For me, this is a personal battle. As a nurse, I cared for a young girl who tragically lost her life due to an abortion. And as a nurse and a mother, I know we need to protect women and girls who seek abortions with commonsense protections like informed consent and proper regulation of abortion clinics — the same commonsense protections provided to women in our surrounding states. It is time for Tennesseans to show that we care about the health of women and children impacted by abortion.”

Senator Rick Santorum – “I am proud to stand with my friends in Tennessee committed to fight for the sanctity of life. Passing Amendment 1 will return the power to enact abortion restrictions back to the legislature and into the power of the people, rather than with a few activist justices. If Amendment 1 does not pass, members of the Tennessee legislature will continue to be unable to pass any basic abortion protections because the court will strike them down as a violation of one’s “right to abortion.” We must do more to protect all life – born and unborn – and I encourage Tennesseans to vote in favor of Amendment 1”

If you are still wondering why you should vote for Amendment 1, this amendment will allow us to pass common sense legislation to amend, repeal or replace outdated abortion laws. In 2000 our Supreme Court ruled that our State Constitution allowed for a “right to abortion” under the “right to privacy” clause. Since then, abortion laws have been overturned, and now we have NO informed consent, NO regulation of abortion facilities and NO waiting period.

A huge THANK YOU goes out to all of our speakers, also the Baldwin family, State Representative Beth Harwell, and the House Speaker’s office, for their help with organizing this event.

Please vote “YES” on Amendment 1 and encourage your friends to do the same. Pray for the people of the state of Tennessee and our local and state leaders. And remember to get out and VOTE on November 4!