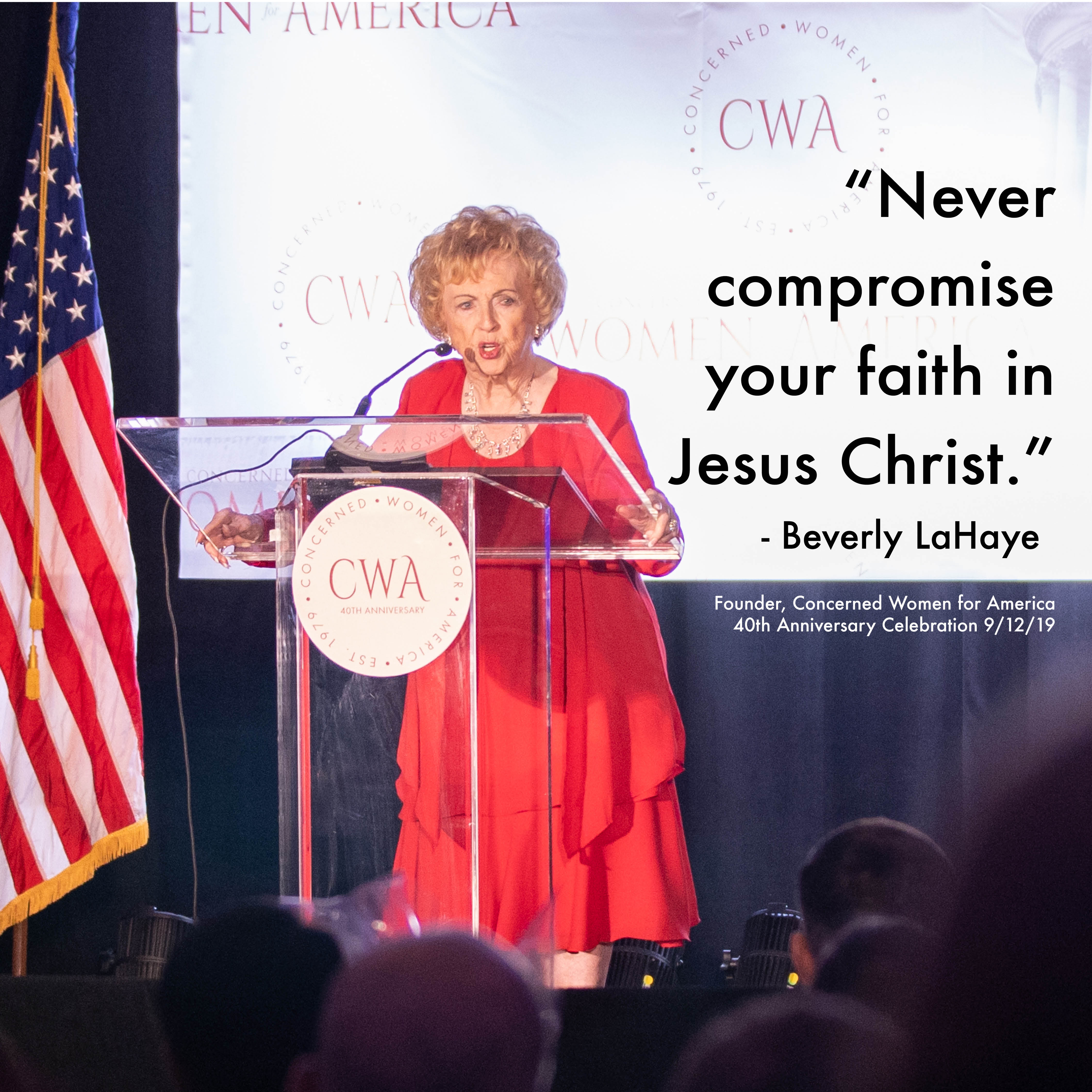 CWA’s Founder and former Chairman of the Board, Mrs. Beverly LaHaye, addressed the Board, CWA staff and employees, volunteers and former staff at the organization’s 40th Anniversary Gala. She credited God with the success of CWA.

TRANSCRIPT:  “A lot of credit has been given to individuals but I want you to know that it was not Beverly LaHaye. It was my Heavenly Father. I was very happy and content where I was placed as Tim LaHaye’s wife, a pastor’s wife.

But God put something on my heart. It was in January of 1979 when we signed the official documents to make Concerned Women for America legal. And that was the beginning of Conservative women of faith to have a voice that would affect the future for our families and for our nation.

You know, as you’ve already seen – prior to this – the feminists had all the attention. They had the news, they had the television, radio, in the newspapers. Everytime you opened it up, they were there speaking.

But, Praise God – today we’ve got conservative Christian women who are speaking out and taking leadership and I thank each one of you for all that you’re doing.

You know God has opened CWA step by step. If He had revealed to me, back in January of 1979 what he was going to do with Concerned Women for America, I would have probably said, “God, you got the wrong girl. I can’t do that.” But God only takes us one step at a time. And, as we are faithful and obedient to obey His leadership, then He will do great things for each one of you. But, don’t expect the big picture to start with. You’re not going to get it. He wants you to go one step at a time. And, I very humbly say that that’s what I had to do.

Let me give you some of Paul’s words in Ephesians chapter 6 verse 12 where he describes it so well. He stated that we do not wrestle against flesh and blood but against the rulers of the darkness of this age…..”

Mrs. LaHaye explained how the organization got started and what it became.

TRANSCRIPT: “We began to grow after we got started and 2 years after we were legally established we sent out a newsletter and we sent it out to 80,000 women across the nation who were eager to know what we were concerned about and what they could do about it. And, I’m thrilled that that number has grown and grown and grown. You know some have said that the growth of CWA is a miracle. So, I went to Webster’s collegiate dictionary and I wanted to see what was the definition of a miracle and here’s what it said. A miracle is a extraordinary event manifesting a supernatural work of God — and that’s CWA.

During those 40 years, I had many influential people giving me encouragement and helping me along the way. But one I will never forget and that was the late Doctor Francis Shaeffer who was a forerunner of the pro-life issues. One day I had the privilege to sit and talk with him and he said to me, “We must use our freedom to preserve our freedom while we still have our freedom or neither our children nor our grandchildren will rise up to call us blessed.”

And today I’d say Dr. Shaeffer, I’d have to add my great grandchildren, too – which I have 19 and I want them to always know that we were fighting for the freedom for their life and for their country. In fact, Dr. Shaeffer went on to say to me, “Beverly, what would you think when your grandchildren said to you, “Grandma, what were you doing when they were killing all those babies?”” I want my grandchildren to know I was doing everything I could to save the lives of babies following them….”

Mrs. LaHaye finished her remarks with a special charge to the current leaders and volunteers of CWA and YWA from Ephesians 6.

TRANSCRIPT: Paul also tells us in that chapter, in the evil day to stand strong for righteousness, as taught in the Bible. God has laid out what righteousness is. He demands. He instructs us. This is the righteousness that God expects.

And, lastly as an ambassador for Christ and also for CWA, I say according to Paul, “Speak boldly for truth that is taught in God’s word; do not shy away from the truth and ladies and gentlemen, never, never, never compromise the truth that you boldly proclaim.

And while you’re still standing I just want to close by saying… I tell you I will pray for you – that you will be strong, noncompromising and speaking boldly for truth across the United States coming from areas where maybe there is no CWA chapter maybe there is no prayer chapter that you’ll go back and we will stir it up and wake up Americans and wake up women to stand strong in this evil day.

And be assured that as I leave this position, you will all be in my prayers that we will be effective. May God bless you all. You may be seated.