Statements on the SOTU 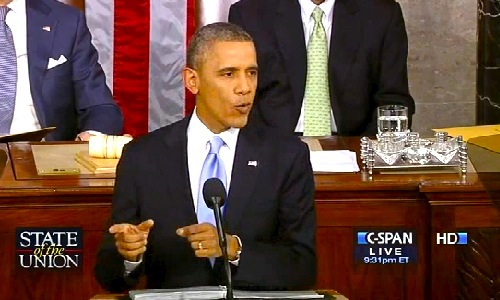 This year’s State of the Union Address was not a surprise to most viewers — it was evident that the President is aware of the fact that his term is winding down and he no longer needs the vote of the American people. His plan is to accomplish his goals — with or without the newly-elected Congress.

The President wasted little time in mentioning bipartisan negotiation between the executive branch and members of Congress. Democrat leaders arose and applauded the President’s quote, “We’ve got a system to fix. And if a bill comes to my desk that tries to do any of these things, it will earn my veto.”

When President Obama was voted into office in 2008, one of his promises was to cross party lines and create a bipartisan sentiment during his time. During the 2008 race, NPR published some of President Obama’s touted claims on his knack for coalescing different groups. In the piece, they included this quote from the President:

Now let’s fast forward to this past year. In just 20 days in office, President Obama has already threatened to veto actions within the newly-elected, Republican majority Congress. Actually, as of 2014, President Obama has issued a total of 191 executive orders. Instead of using his said ability to compromise on the issues, President Obama’s 2014 strategy was to act alone in order to get his policies passed and avoid another government shutdown. Last year’s tactic was to bypass the Republican-dominated Congress on multiple occasions, and that is just what he did.

Another recurring theme throughout President Obama’s speech was the “success of Middle Class economics.” However, according to sources, under the Obama Administration’s policies not only have employees’ hours been significantly lowered, but 17 million Americans are currently unemployed. In data collected by the Bureau of Labor Statistics, the labor force has decreased by 3% from the time that President Obama was voted into office.

Further on in his discussion of the American economy, President Obama addresses the wage gap between men and women. We see here yet another example of the Left promoting a false “War on Women.” It is now evident that the wage discrepancy between males and females is an inflated myth, as the differences are often a result of choices that women are freely making…

Which is a great segway to the President’s comment that women deserve a right to choose. He stated that, “abortions are nearing all-time lows and that every woman should have access to the health care she needs.” As a female taxpayer, I was not given a choice whether to help fund abortions under the Affordable Care Act. Furthermore, abortion rates are still horrendously high; according to a Guttmacher report, over one million abortions are performed per year in the U.S., and in 2013 alone, Planned Parenthood aborted 327,653 innocent babies. There is a holocaust going on under the guise of ‘female choice,’ and the American people cannot allow leftist verbiage to mask the truth.

Speaking of truth, it is fitting that the President also mentioned his “Free” Tuition proposal. These days, there is no such thing as free; someone always has to pay, and in the case of Obama’s proposed plan, that someone is the American taxpayer. The irony in the $60 billion proposal is that it is actually a model of a plan that was created as a local state plan in Tennessee. Even Republican leaders are not backing the national version of the plan. Representative Diane Black (R-Tennessee) said that she was skeptical of the “top-down federal program.” Some argue that if the system was a success at the state level, it points to idea that states can clearly handle school choice issues just fine on their own.

“First, we stand united with people around the world who’ve been targeted by terrorists – from         a school in Pakistan to the streets of Paris.”

Notice that he made sure to mention U.S. support for our allies in France. Yet again, the Administration voices our support in word; however, we have failed to follow through in deed. That includes not only our absence at the Paris rally, but also our actions regarding issues like Iranian nuclear development. Without naming the legislation, President Obama gives his sentiments regarding the Menendez-Kirk bipartisan Iran legislation. He mentions that he will veto any new sanction plan that will undo the progress of negotiations made so far with Iran.

It is crucial that the American people realize that again, this language is misleading. This legislation would not impose new sanctions but instead would ensure diplomatic leverage in Iran. The government of Iran has continued to expand its nuclear infrastructure and violated its agreements. Iranian leadership does not plan to stop their efforts anytime in the near future. The Menendez-Kirk legislation is actually a bipartisan piece that merits further study by the President.

President Obama finishes his concluding remarks by calling on Americans to ‘work together’ to remake America. In order to do so, he must listen to members of the opposing party like Senator Joni Ernst (R-Iowa) who, in her rebuttal, called for change on behalf of the American people. She stated that the American taxpayers have already sent a clear message through the November elections. She recognized that many families feel like they are working harder and harder, with less to show for it. Americans are now more pro-life than ever, yet abortions still persist. It will take bipartisan effort to affect change in the areas that matter to Americans in 2015—issues like protecting the unborn, denouncing terrorism, giving schools and parents the choice in education, boosting our economy and increasing jobs.