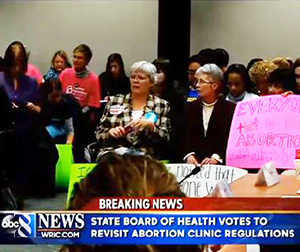 “In 2005, I began to sense God was redirecting my ministry focus after being in children’s ministry for five years.  In the fall of that year, I attended an E-Women conference, where I stumbled on a Concerned Women for America booth.  I was familiar with this organization, so I spoke to the ladies and, shortly afterwards, started attending a Prayer/Action Chapter meeting.  While attending these monthly meetings, I discovered how much I had forgotten about our governmental process.  These passionate and caring ladies began my journey to become educated on the process of federal and state government.  In the very beginning, I could not even tell you who my state representatives were.

In those early days, I was a Home Team Captain with CWA and a Church Liaison with The Family Foundation.  In those positions, I recruited individuals to be on my Home Team.  I was to disperse information via e-mail to encourage my team to take action (educating, praying, and acting on issues of importance). With the Family Foundation, I took training on how to encourage the church to be involved in passing the Marriage Amendment.  So the Marriage Amendment is what propelled me into action.

I attended my first CWA National Leadership Conference in September 2006.  Looking back to that conference, I can see how God was preparing me.

After the Marriage Amendment was passed, my husband and I attended a victory celebration.  It was to be a prophetic night.  We were talking to the grassroots director of Family Foundation and discussing the fact that the Virginia director had stepped down to run for office.  Steve said to me, “You could do that!” and I promptly said, “Oh no, I’m too new.” A few minutes later as we walked away, my husband turned to me and said, “They are going to ask you to do that.”

In June 2007, I was approached by a long-time CWA member and asked to be interim State Director.  The very next Sunday (June 17), a dear lady at church handed me a note and said she was impressed to give this to me.  She had no idea what was swirling around in my head.  Romans 8:28. “And we know that all things work together for good to those who love God, to those who are called according to His purpose.”  She said “Respond to His leading and trust; He will work it out.”

I was in a Beth Moore study “Seeking Him,” and that particular week was on grace.  I’ll share some quotes from that week God used to lead me in the decision process.  “Grace is that which God gives us to meet His requirements and to face the difficulties of life.”  “Do I take God’s grace for granted or have I lost the sense of wonder of what God has done for me?” (Or can do for me?) “God’s grace is the dynamic quality of His life within us that gives us both the desire and the power to obey God.  God is fully aware that we are incapable of Godly living in spite of our best intentions or efforts.  His grace is His supernatural supply for all we lack.  He promises to equip and empower us to do whatever He requires of us.”  Philippians 2:13 says it is God who works in you to will and to do for His good pleasure.

I had noted in the book that week, “I feel totally inadequate to do a task that God has called me to do.”

I was dumbfounded really.  So for the two weeks, I struggled; I reasoned; I questioned.  One of my main concerns was my lack of ability, education, and knowledge in this arena.

A couple weeks later, our church had a special guest — a trumpeter.  It was as if God ordained this message just for me.

I Corinthians 14:7-8 “… how will anyone know what tune is being played unless there is a distinction in the notes, Again if the trumpet does not sound a clear call, who will get ready for battle?”

God was calling me to sound a clear call through the vehicle of CWA.  So I answered the call.  Has it been easy? No!  Has it been convenient? No!  Has it required me to move out of my comfort zone? Absolutely! Would I change my answer to the call — most days NO!

I leave you with two verses. May they challenge you to say “Yes” to God and “No” to your doubts.

Acts 4:13 — “When they saw the courage of Peter and John and realized that they were unschooled ordinary men, they were astonished and they took note that these men had been with Jesus.”

If you feel that you are being called to serve, make today the day that you say “yes.”  Just like Janet, God will use YOU to impact America! For more information on how to lead or join a CWA State Chapter or Prayer and Action Chapter, attend events and rallies, sign petitions, and much more, visit www.ConcernedWomen.org. 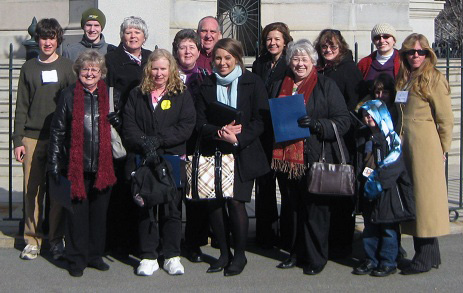