State Board of Health Revisited the Abortion Clinic Regulations and Licensures 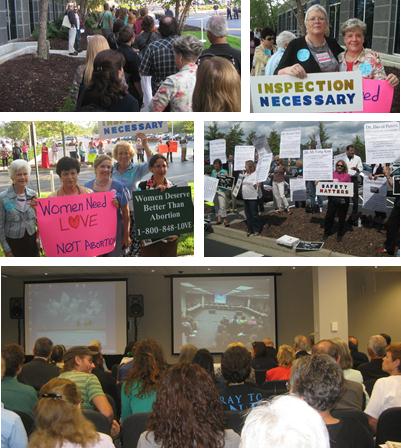 Hundreds of pro-lifers answered the call to be present at the State Board of Health meeting last Friday as they revisited the abortion clinic regulations and licensures. Even though the meeting was not scheduled to start until 9:00 a.m. hundreds were in line by 7:30 a.m. Many took a day off of work and drove hours to be present. I was impressed by the behavior of all in line (both pro-life and pro-choice) even though we disagreed with each other. An abundance of signs and stickers were proudly held and worn by both sides of this issue.

The pro-lifers I interacted with are concerned with both victims – the mother and the baby, but today the focus was on the safety and well-being of women who find themselves in hard places with difficult decisions to make. With the recent disclosure of inspections done throughout the state and the 80 citations, it is evident that after 20 some years, abortion clinics cannot self-regulate.

As the decision was handed down, it grieved my heart to see the reaction of those who were in disagreement with us. I could only think of the phrase, “Hurting people hurt people”. They began to chant, wave their signs, and ignored warnings to sit down and be quiet, so they were escorted out of the room.

CWA of Virginia is grateful to the Virginia Board of Health as they approved the regulations as established by the Virginia General Assembly and reversed their June decision to eliminate building standards. Hopefully, this will mean that clinics will provide protection over profits and dignity over dollars as these regulations are enforced.